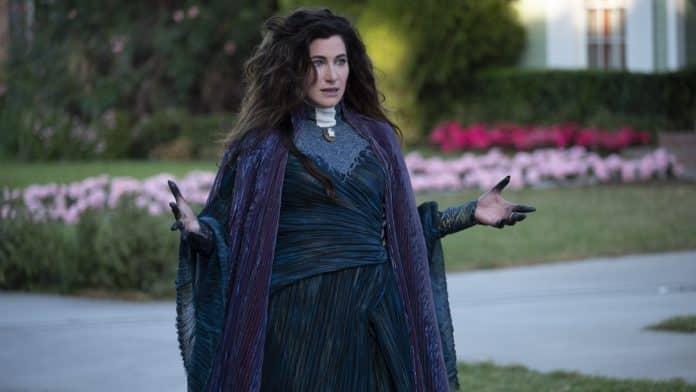 The hit series named WandaVision is all set to spin-off its work with Disney Plus, starring actor Kathryn Hahn who will be playing Agatha Harkness. Wanda Vision has firstly premiered on Disney Plus in the month of January this year, which has gained positive reviews. It is the first show that has come out of Disney-owned Marvel Studio’s which is a highly successful superhero franchise named Marvel Cinematic Universe (MCU).

This show also features Elizabeth Olsen as Wanda Maximoff and Paul Bettany as Vision. The show will show us about the two superheroes, who will be living their ideal suburban lives in the town of Westview, New Jersey but they soon begin to suspect that everything is not as it seems.

Hahn has played the role of Agatha Harkness who is a nosy neighbour and the main adversary of Wanda and Vision. According to Variety, Hahn would return to play the role in the spin-off series, which is described by sources as a dark comedy.

Although nothing has come to know about the plot, it still remains under wraps.

The head writer of WandaVision is Jac Schaeffer, he has also a deal to pen the script for Marvel and Disney’s 20th Television, will pen the script.

Hahn will likely next feature in Showtime’s The Comeback Girl, in which she will portray the role of legendary comedian Joan Rivers.

The actor is also a part of the cast of filmmaker Rian Johnson’s much-awaited Knives Out 2.

BTS is going to appear on Disney Plus very soon