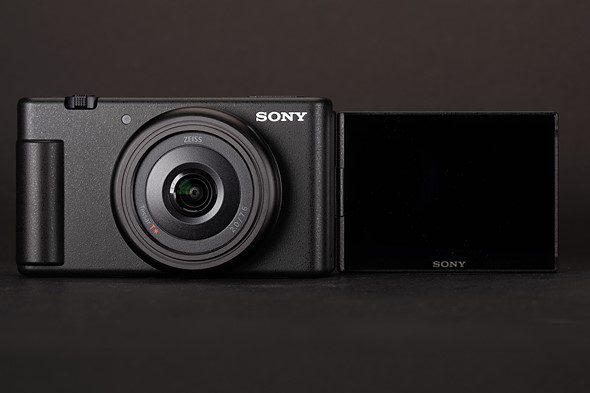 Sony is adding a new model to its growing line of vlog-first cameras. The ZV-1F follows the first entry, the ZV-1 from 2020, and last year’s changeable lens ZV-E10. But where previous entries had come in at higher prices and chased more advanced users, Sony has pared down some features with the ZV-1F to meet a more starter-friendly $500 price point.

The ZV-1F utilizes a 20.1MP 1.0-type 13.2mm x 8.8mm Exmor RS CMOS sensor. However, this time around it has a 20mm (35mm equivalent) f2.0 fixed prime lens. The new lens has a broader field of vision, making it ideal for content creators. Sony includes a range of image profiles, including S-Log2, S-Log3, and HLG, with the new point-and-shoot camera, although it’s worth noting that the ZV-1F can only record in 8-bit 4:2:0.

However, it also makes it less versatile for shooting products, other people and so on, though you can do a digital zoom of 2x in 1080p and about 1.5x in 4K. It has no built-in stabilization, instead relying on electronic stabilization that imposes a 1.23x crop, making the 20mm lens about 25mm.

You can shoot 4K at up to 30 fps, the same as the ZV-1, and 1080p at up to an impressive 120fps (with 8-bit video in all modes). That’s done by the “slow and quick” setting, which also supports 60x hyper-lapse capture in HD. However, unlike most other Sony models, the ZV-1F has contrast-detect-only autofocus, rather than phase detection that’s generally faster and more accurate.

On that note, the new compact unit still supports Wi-Fi and NFC as well as SD-card, USB type-C (also for charging) and (unfortunately, mini) HDMI outputs. It is also compatible with wireless tripod grips such as the first-party GP-VPT2BT and can be used remotely via the OEM’s new Imaging Edge Mobile Plus mobile app.

The ZV-1F features a compact and lightweight body, weighing only 229 grams, with an articulating screen for self-recording. Users can connect the camera to a computer through Type-C for live streaming, but keep in mind that the resolution is restricted to 720p at 30 frames per second.

The Sony ZV-1F vlogging camera costs $500 and will be available from October 24, 2022. The Sony Vlogger Accessory Kit, which includes a Wireless Shooting Grip and a 64GB memory card, can be purchased separately or in conjunction with the ZV-1F.