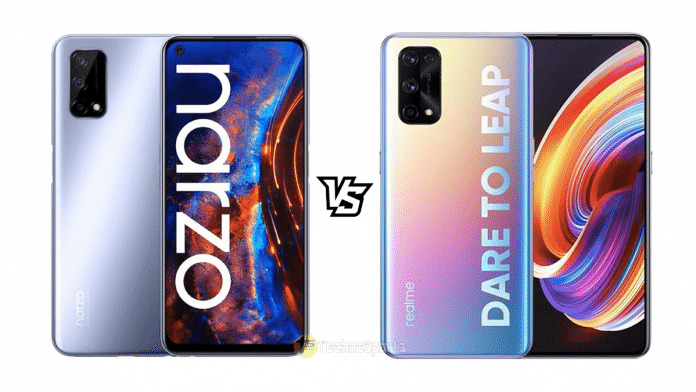 Realme has launched two budget smartphones in February with some super cool features in India. These are Realme Narzo 30 Pro and Realme X7. Both smartphones come with 5G connectivity and have the potential to attract a lot of customers. Let’s see which device is better under Rs 20,000.

Realme X7 and Realme Narzo 30 Pro are powered by the MediaTek Dimensity 800U mobile chipset. This is a 5G chipset.

Also Read: Report: Samsung and Oppo to compete to gain from LG’s exit from the smartphone market

Realme Narzo 30 Pro features a triple rear camera setup. This includes a 48MP primary sensor along with an 8MP ultra-wide and a 2MP macro sensor. Realme X7 also sports a triple rear camera setup which features a 64MP primary camera, an 8MP ultra-wide lens, and a 2MP macro lens. For selfies and video chats, both smartphones offer a 16 MP selfie snapper at the front.

Realme Narzo 30 Pro has a better display thanks to its 120 Hz of refresh rate as compared to Realme X7’s 60 Hz. Due to the same chipset, nothing to separate between them in the processor’s domain. The camera specs of both smartphones are very similar but the primary camera of Realme X7 is much better than what is offered in Realme Narzo 30 Pro.

In terms of battery, both smartphones are neck-to-neck. One has a bigger battery cell but the other smartphone can be charged faster. Realme Narzo 30 Pro offers 8 GB RAM for Rs 19,999 whereas the Realme X7 offers only 6 GB RAM. Thus, cumulating all the factors, the fight between these two is very tight but we might just prefer Realme Narzo 30 Pro.

Realme X7 Max 5G Launching on 31st May in India