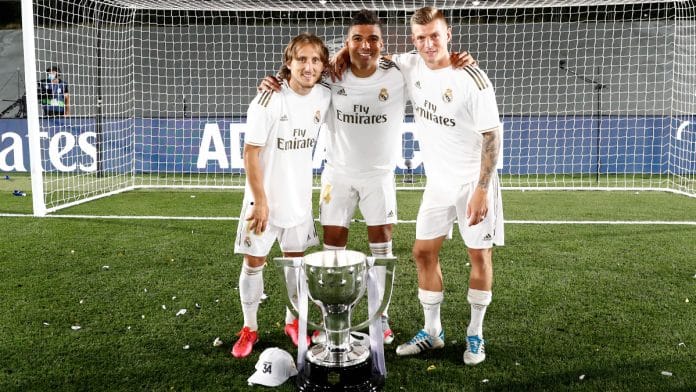 While Real Madrid aren’t the attacking force that they once were when Cristiano Ronaldo, Gareth Bale and Karim Benzema were all operating together, Zinedine Zidane has adapted really well to the absence of the attacking output.

The midfield trio of Kroos, Casemiro and Modric is still alive and kicking at the Spanish capital. And their importance has never been higher to Los Blancos. According to the numbers, Toni Kroos has the highest pass completion rate in the Champions League, while Luka Modric is third in that metric.

Casemiro’s presence has also been immensely valuable for Zinedine Zidane’s team, with the Brazilian being vital to Madrid’s defence. All three midfielders have been essential in scoring the much-needed goals for the team to get wins.

Madrid go up against Chelsea in the Champions League semi-finals and trail behind in La Liga by only a singular point and will be trying their best to close down that gap and secure a successful title defence after winning the league for the 34th time last year.

The prolific midfield trio has not only quality to offer but also has the much-needed experience which is invaluable. They have also managed to keep out talented youngsters like Federico Valverde and Martin Odegaard from being consistent in the first team due to their superior performances.

Zinedine Zidane has prioritised defensive output since his return to Madrid, and the midfielders have been essential to that being executed successfully.

Should Madrid end up winning either of the Champions League, La Liga or both, the trio of Kroos, Casemiro and Modric will certainly have a lot of credit for the silverware.