Raul Sanllehi, Arsenal head of football has left the club and is replaced by Vinai Venkatesham 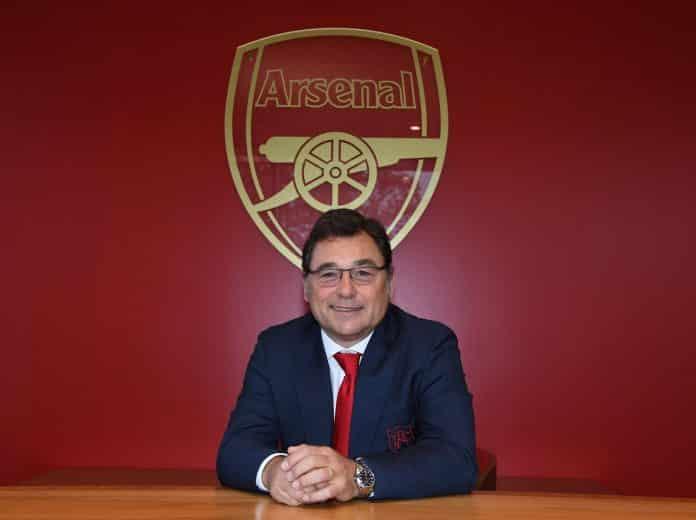 There was a recent controversy regarding the £72m signing of Nicolas Pepe from Lille last summer, though Arsenal has denied that they have carried out an internal investigation on this matter.

Arsenal head of football, Raul Sanllehi has left the club on Saturday. He has now released a statement revealing the reason behind his Arsenal departure.

Raul Sanllehi has released the following statement after his departure from Arsenal. #AFC #Sanllehi pic.twitter.com/DKi16js5qk

The statement read: “It is with mixed feelings I end my professional relation with Arsenal… As said, many mixed (and contradictory) feelings arise, from deep sadness, to full pride and gratefulness to have been given the opportunity to work in such a special club alongside the best professionals and human beings I’ve met over my 25 years in this industry.”

“I will continue a Gooner for the rest of my days, and I will be celebrating every goal and every title they (WE) achieve in the coming years.”

“I said I had many contradictory feelings at this time, MANY, but I can assure you one that I DON’T have in anger.”

“Of course I feel frustrated and powerless, but I also have the certainty I gave my best work and effort to bring this club back were it belongs. I don’t want to bore you further with a long message, but did indeed want you to know this news from me.”

“There is no one to blame for this, other than Covid, and the need to adapt and remodel the club’s structure to the new times. I’m very comfortable knowing the club is in great hands, starting from a fully committed ownership to a second to none group of professionals filled with passion and commitment to make this great club successful.”

“The foundations are solid, and I’m convinced the dawn of a great era is just starting. The values of Arsenal (Togetherness, Acting with Class, Always fame.) will be stuck in me for the years to come. I wish the best to Arsenal.”

Stan and Josh Kroenke thanked Raul for his contribution to Arsenal. The statement read: “Raul has made a big contribution during his time with us and will always be part of the Arsenal family,”

“We thank him for all his hard work and expertise and wish him every future success. We have no doubt that Vinai is the right person to take the club forward.”

“He has shown outstanding leadership during the current crisis and is held in high regard internally and externally. We know everyone will rally round him so we can move forward successfully.”

But the big question remains why has Raul left the club just after the news of internal investigation into Pepe’s transfer?

According to a report by ESPN, individuals working for other clubs who became involved in preliminary talks with Lille were taken aback by the amount Arsenal eventually paid.

The Gunners paid £20m upfront but have committed a further £52m over the next five years, the first instalment of which is due this summer.