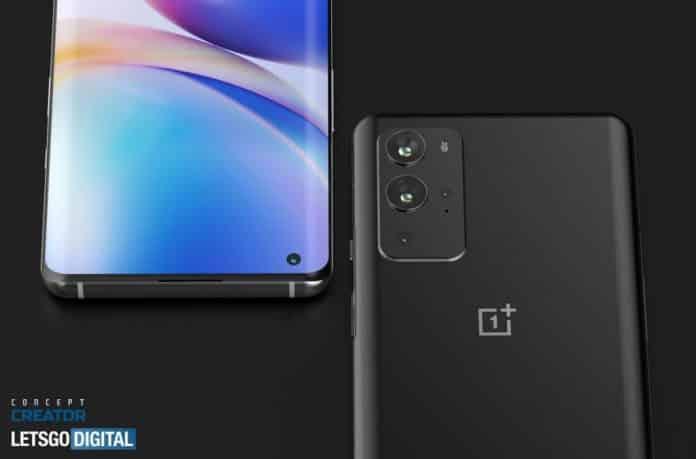 Recently, the upcoming OnePlus 9 and 9 Pro renders have been revealed. The renders show that the rear camera design is quite similar to the OnePlus 8T and Nord N series. There is no similarity between the 7 Pro and 8 Pro designs. We can witness four sensors (2 bigger prominent lenses and 2 smaller lenses) in that rear camera module. So, it is basically a quad rear camera setup that includes a wide-angle sensor, an ultra-wide-angle sensor, and a telephoto lens. The function of the fourth sensor is yet unknown. We can not see any rectangular lens, so there may not be a periscope lens in this module. Also, it is not quite sure whether the IR camera will make its return.

Now let’s talk about the display. What it looks that the upcoming OnePlus 9 Pro features a curved display rather than a flatter one. If we compare it to the OnePlus 8 Pro, it is expected to have a 6.7-inch diagonal curved display with a rumored refresh rate of 144Hz. On the other hand, the OnePlus 9 Pro will feature stereo speakers with Dolby Atmos support. As per the renders, the regular OnePlus 9 will feature a flat display.

In terms of the OnePlus 9 renders, this model will be available in different color variants. Coming to the section, this phone will feature a triple rear camera setup (quad-camera for the Pro variant). Apart from it, other specifications are likely to be similar between the OnePlus 9 and OnePlus 9 Pro smartphones. Both of them will be powered by an octa-core Qualcomm Snapdragon 875 chipset paired with 8GB of RAM (as per the Geekbench listing). In terms of the battery, there will be a support of 65W fast charging. As of now, OnePlus has not confirmed any date of releasing the OnePlus 9 series. But we can expect that the company may launch these two new smartphones in the upcoming March of 2021.