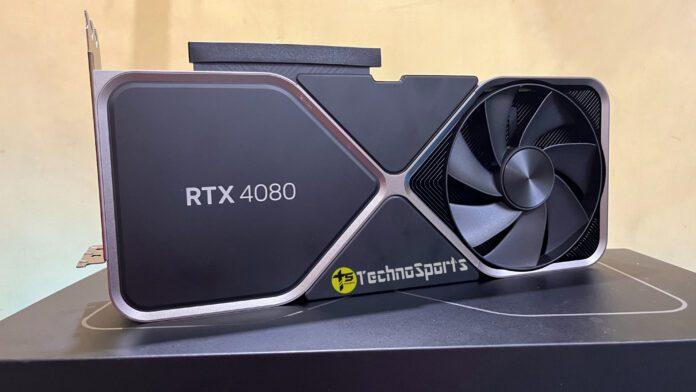 Team green has already its Ada Lovelace architecture and its GPUs namely, RTX 4090 and RTX 4080 with massive price tags, looking as if both NVIDIA and Apple are competing with their pricing of iPhones and GPUs, which now almost cost your kidney’s price. Jokes apart, starting for $1199 and over Rs.1.2lakh here in India, it’s a damn expensive offering and so unless you are very serious about gaming no one will actually think of buying this GPU.

The pricing is seriously a matter of concern or says has been done tactically so that the RTX 4090 looks like a better offering by spending $300 more. Though we thought NVIDIA would eventually reduce the pricing of the RTX 4080 this is not the case, so, here we will tell you if buying this GPU makes sense and is meant for whom?

Here we got the pretty rare RTX 4080 FE edition and it’s a very bulky GPU which looks damn cool, the packaging just looks next-level. Overall, undoubtedly, the GPU gives you a premium appeal and is clearly targeted towards gamers who want a premium 4K gaming experience with no compromise, also accompanied with DLSS 3, the performance is truly next-gen.

The world’s first GPUs based on the new NVIDIA® Ada Lovelace architecture, the RTX 40 Series delivers massive generational leaps in performance and efficiency and represents a new era of real-time ray tracing and neural rendering, which uses AI to generate pixels.

“The age of RTX ray tracing and neural rendering is in full steam, and our new Ada Lovelace architecture takes it to the next level,” said Jensen Huang, NVIDIA’s founder and CEO said during the launch of these cards. As we all know, RTX 4090 came to market earlier than the RTX 4080 and if you see average sales everywhere around the globe, the RTX 4090 with its premium price enjoyed better sales than the recently available RTX 4080.

Additionally, the RTX 40 Series GPUs feature a range of new technological innovations, including:

NVIDIA during the launch back in September 2022, told there will be two variants of GeForce RTX 4080, one with 12GB VRAM and the other with 16GB VRAM. While the former was supposed to come at the starting price of $899, it got cancelled eventually and as per rumours, the upcoming RTX 4070 Ti will be a rebranded RTX 4080 12GB.

Currently, the RTX 4080 you see in the market is the 16GB variant featuring 9,728 CUDA cores and 16GB of high-speed Micron GDDR6X memory, and with DLSS 3 is 2x as fast in today’s games as the GeForce RTX 3080 Ti and more powerful than the GeForce RTX 3090 Ti at lower power.

When it comes to productivity, NVIDIA off late has significantly levelled up its game against AMD and has mature Tensor cores alongside NVENC encoders help to render video quickly or make graphical changes in complex Blender projects easier. While we focus more on the gaming part, however, still we have a basic productivity benchmark comparison that will give you a better idea of how this RTX 4080 stacks among the best GPUs in the market.

Here are some of the productivity benchmarks which show the dominance of this RTX 4080:

As you see in the charts, across the board the RTX 4080 totally dominates every other GPU out there and pulls off a hefty lead for any productivity-related applications. So, it’s clear that NVIDIA’s work to make these new age Ada Lovelace Gaming GPUs also great for productivity works is indeed true.

Even with fast 16GB GDDR6X memory, the RTX 4080 is fast but those who only want a GPU for productivity anyways are and will look for RTX 4090 as a better option investing a few more bucks to get over 20% better productivity performance. Though the RTX 4080 is no doubt powerful the $1199 pricing doesn’t justify it at all and it’s intentionally done so to make the RTX 4090 a better value-for-money proposition at a whopping $1499 price point.

Coming to gaming, the hefty performance bump does give a boom in 4K gaming but still it’s not substantial to RTX 3080 if compared to rasterization performance but with the newly developed DLSS 3 it’s quite good. At 4K highest of settings in very intensive games like Shadow of the Tomb Raider or Assassin’s Creed Valhalla, you see over 100 FPS which is truly flagship-level.

So, naturally, even without DLSS, which has matured a lot but cannot give the native performance, you can really enjoy heavy games on your 4K 120Hz monitor finally! You name it any game is finally playable without DLSS even Cyberpunk 2077 at Ultra will give you 70FPS+ performance.

This kind of gaming numbers could not have been imagined before and finally, 4K gaming seems to be gaining momentum with these powerful GPUs off late. In all our games as you see, the RTX 4080 flies through without even the need for DLSS and it’s great to see that making a huge investment like this will result in a better gaming performance overall.

The special feature that these RTX 40-series GPUs bring onboard is DLSS 3 and we have tested a few games with this new tech which also involves Frame Generation. While DLSS 3 can be used as standalone upscaling tech and with Frame Generation turned on, virtual FPS can be embedded while gaming to improve performance with minimal impact in performance.

However, the RTX 4080’s higher costs and the actual retail pricing are quite absurd, unless they retail for less than $1000 or Rs.1lakh in India, it’s highly unlikely that gamers will actually flock to this RTX 4080 anyways and go all in for the RTX 4090 which is why NVIDIA has made the pricing so absurd this time.

Now, talking about whether should you go for this NVIDIA GeForce RTX 4080 or not. Well, this GPU is a strong performer at 4K undoubtedly but its higher pricing makes it harder to recommend just yet while we do support NVIDIA’s new tech like DLSS 3 and Frame Generation but for an average gamer this is expensive.

While supposing you have the money to spend, the RTX 4080 is not the best value but the RTX 4090 is a better proposition, however, it’s getting sold out because of this reason. The RTX 4080 looks more like a decoy card to make the ultra-flagship RTX 4090 a better buy, so if you really want to enjoy the flagship 4K gaming performance, wait until the RTX 4080’s price cools down.

However, if this price and all don’t matter to you much, you can easily spend on the new NVIDIA card and get supreme 4K gaming performance/ray tracing alongside all NVIDIA exclusive benefits as well as strong productivity performance as well.

Team green has already its Ada Lovelace architecture and its GPUs namely, RTX 4090 and RTX 4080 with massive price tags, looking as if both NVIDIA and Apple are competing with their pricing of iPhones and GPUs, which now almost cost your kidney's price....NVIDIA GeForce RTX 4080 review: Deadly gaming GPU but not cheap