FIFA 21: How to do the 87-rated Darwin Machis’ Europa League Road To The Final SBC Card and is it worth doing? 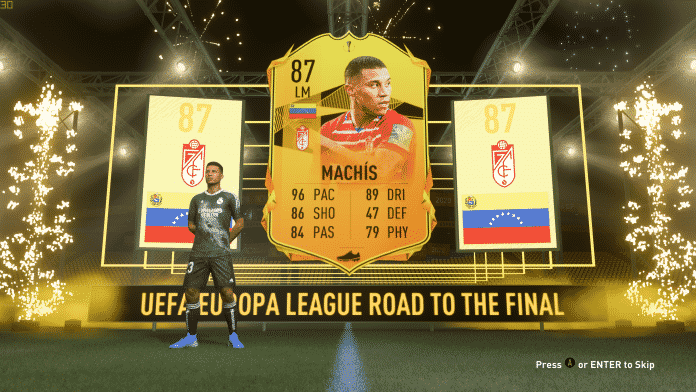 FIFA 21 has introduced a new SBC in the form of Granada winger Darwin Machis. He has received an 87-rated Europa League Road To The Final card.

As Darwin Machis plays in the top-flight of the Spanish league, La Liga, he will be pretty easy to connect with other players.

Machis plays for Granada, and they have been drawn against Premier League giants Manchester United in the Europa League quarter-final. It would be a huge ask for them to progress to the semi-final, so you will have to assume that the Machis’ Europa League Road To The Final card won’t increase, and it will remain 87-rated. Therefore, is it worth doing still?

I would say, yes, absolutely. If you like to play with pace, then Machis will be your ideal choice. He has outstanding pace and decent shooting and passing.

Darwin Machis has a high attacking work rate and medium defensive work rate, which is excellent. He has 4* skill move and 4* weak foot, which is another good thing about the card.

I have put Hunter chemistry on him, but you can put other chemistry styles on him as well to improve his passing, shooting or physical. The most astonishing part of this card is the pace. He has 98 acceleration and 95 sprint speed, making it almost impossible for his opponents to catch up with him.

The shooting attributes are also more than decent, with 94 shot power and 88 finishing. Another fascinating stat of this card is the 99 agility and balance.

The Darwin Machis Europa League Road To The Final card is even better than basic Mane. You can see in the comparison that Machis has everything higher than Mane except dribbling, which won’t be an issue.

You can use this Machis card to go past your opponent’s full-back and cut inside and score a finesse goal! I have played a few matches with him and have liked the card till now. I would suggest you all to do this Darwin Machis Europa League Road To The Final card if you like pace.