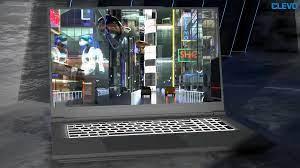 Clevo, a laptop maker that makes machines for Schenker / XMG, Maingear, Eurocom, and other brands, has released a video displaying its new X270 notebook with an Intel Arc A770M mobile GPU (via @9550pro). The laptop is dubbed “the first Intel CPU + GPU Gaming laptop” by Clevo since it features an Intel Alder Lake H processor and an Intel Arc board.

Because the X270 is a gaming laptop and Intel Alder Lake H CPUs are power-hungry, Clevo uses seven copper heat pipes and liquid metal on the CPU to keep temperatures under control. The company claims ’10 degrees less than normal.’

The display of the Clevo X270 notebook is a 17.3-inch Mini LED display from AU Optronics

With two Thunderbolt 4 ports, an ethernet connector, a mini-DisplayPort, an HDMI, two USB 3.2 Gen 2 ports, a headphone/microphone combo jack, and a microphone/S/PDIF optical combo connection, the the the port situation is also rather decent. Finally, a DC input is provided for charging a 99 Wh battery.

There is no knowing as to how the Intel Arc Alchemist A770M performs because Clevo didn’t provide any performance data in the video. In terms of gaming performance, and Intel Arc A370M found in an MSI reference system appears to be somewhere between the RTX 3050 mobile and the Radeon 680M iGPU. As a result, we should expect performance comparable to or better than an RTX 3060 mobile with the Intel Arc A770M.