Bholaa: Ajay Devgn and Tabu’s Film has Confirmed the Official Release Date of the movie 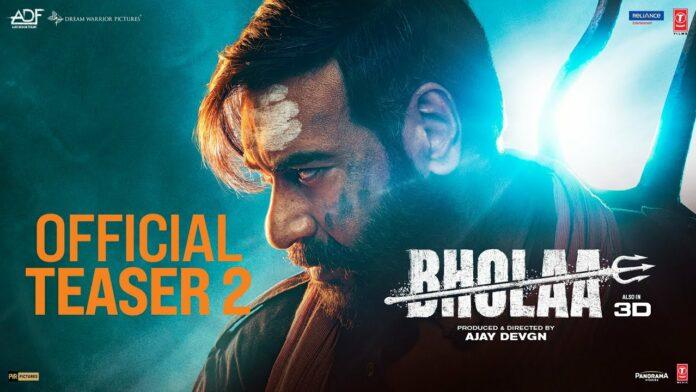 Ajay Devgn and  Tabu’s upcoming film ‘Bholaa‘ comes with the second teaser. The two are playing the role of a  cop, with her arm fractured, being dragged across a dirt road by some thugs. After huge success in Runway 34, Ajay Devgn is once again going to rule the director’s chair once again.

On Monday, the actor declared his next adaptation which he will feature with his one good friend, the actor Tabu. The latest announcement confirms the film which is said to be a “high-octane, strongly-emotional drama,” is under production and also will wrap up the shoot by 20th August.

We will like to inform you that Bholaa is mainly a remake of the Tamil superhit Kaithi which featured Karthi in the lead role. The film was directed by Lokesh Kanagaraj. The 2019’s action-thriller is based on the prisoner who has helped the cop while they have been attacked by a gang of smugglers. The police then help him to get back his daughter.

In 2008, Ajay Devgn directed U, Me Aur Hum and featured his wife Kajol. In the upcoming film Shivaay, he played the lead role when the latest Runway 34 featured Amitabh Bachchan and Rakulpreet Singh.

She also aims her gun at the target before being washed in a sea of red. “Log ye kyu bhool jaate hai… is wardi ke peeche bhi ek insaan hai (Why do people forget that I am a human behind this uniform),” she says in a line from the film, heard in the background. Also in the background, plays a mellow rendition of Aaj Phir Jeene Ki Tamanna Hai from the 1965 film Guide.

Deepak Dobriyal looks nothing like you’ve ever seen him before. With long hair, kohl-rimmed eyes, and all-black robes, he will remind you of early 2010’s hot vampires straight out of Twilight or Vampire Diaries.

It has been styled as the story of a “one-man army, set in one night, fighting a multitude of enemies in various forms, human and otherwise.” Also starring Gajraj Rao, Sanjay Mishra, Raai Lakshmi, and Makrand Deshpande in prominent roles.

The original film revolved around an ex-convict who decides to meet his daughter for the first time after being released from prison but gets caught in a face-off between police and the drug mafia. Bholaa marks Ajay’s fourth directorial film after U, Me Aur Hum in 2008, Shivaay in 2016, and Runway 34 in 2022.

At first, the movie was set to release this March. Now the franchise has confirmed that the fi8lm will hit on 30th March 2023.

- Advertisement -
Powered by JustWatch
Share
Facebook
Twitter
Pinterest
WhatsApp
Linkedin
Previous article
FIFA 23: How to do the 88+ Prime, Mid or WC Icon Upgrade SBC and is it worth doing?
Next article
The Glory: Everything We Need to Know about Korean Drama Series

Thank God: Ajay Devgn as Chitragupta depicts a mirror to Sidharth Malhotra in the Hell