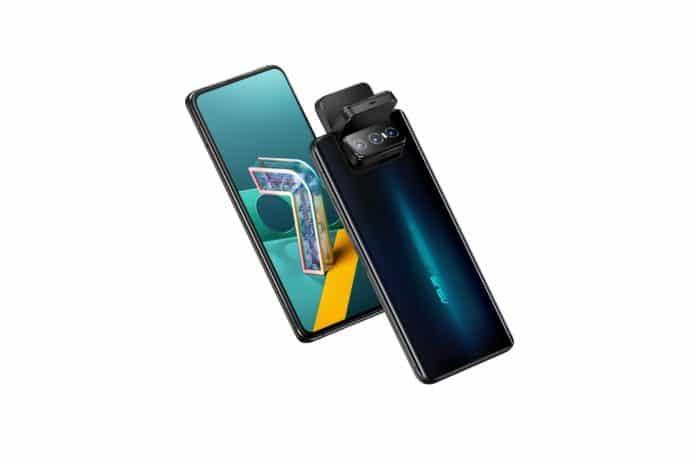 The new Asus Zenfone 7 Pro uses the same Snapdragon 865+ chipset as the ROG phone 3. But Zenfone 7 Pro as well as the normal version are not the gaming phones. This time, the main focus of Asus is its camera. Both phones are launched today in Taiwan.

Asus is step by step improving its flip-up camera first by adding a telephoto zoom lens, and also improving the flip-up mechanism itself. In this phone, Asus uses a smaller motor that has more than double the torque. Camera and main body connection are improved and rated for 100 flips a day for 5 years straight. Also, once open, it can withstand 35 kg of weight pushing it forward.

Coming to its camera, the telephoto cam has an 80mm lens, which means you will get 3x optical zoom by this. An extra advantage of Asus Zenfone 7 Pro is its telephoto camera has optical image stabilization. That means. less shaky and sharp images you can click. On the vanilla model, neither camera has optical image stabilization.

It has a main camera of a 64-megapixel Sony IMX686 sensor with 2×1 OCL autofocus. You can shoot 8K videos at 30 fps and 120 fps slow motion is supported at 4K. Night mode has also been improved with HDR video mode.

Apart from its main camera, it has a 12-megapixel ultrawide-angle camera that uses the IMX363 sensor. This wide-angle camera offers autofocus, which is very rare for ultra wides. Also, it has Dual Pixel AF to boot. This sensor is capable to shoot 4K videos, which is used in HyperSteady Video mode. This camera also doubles as a macro lens, the autofocus system can focus at just 4 cm distance.

Stellar selfies is another interesting and rare feature of Zenfone 7 duo. It has the large 1/1.72″ sensor plus dual ED flash. Still most of the flagship phones do not have the auto focus technology on their front cameras. As it is a flip-up camera, you can record 8K/30 fps and 4K/120 fps selfie videos. Also, you can use the ultrawide sensor to click wide selfies.

Coming to the display of this phone, both the Zenfone 7 smartphones use a Samsung-made AMOLED panel, a 6.67-inch huge screen, and protected by Gorilla Glass 6. The resolution of the screen is 1080+ (20:9), a peak brightness of 1,000 nits, DC dimming for flicker-free low-brightness operation, plus Always On mode, 110% DCI-P3 coverage and an accurate color calibration out of the box.

Refresh rate of the screen is 90Hz and 200Hz touch sampling rate. This phone is powered by the S865+ chipset on the pro model, and that’s why you can play such powerful games without lag just like a gaming phone. The vanilla model is also powered by S865, but it is non plus in this model.

Zenfone 7 has two variants of RAM (6GB and 8GB) and Zenfone 7 Pro comes up with only 8GB RAM. Storage is UFS 3.1, 128GB for the vanilla model, and 256GB for the Pro model. Both have triple card slots. Two slots for dual SIMs and most importantly, a dedicated slot for microSD. Both the phones also support 5G connectivity, if it wasn’t clear from the chipset.

Coming to its battery part, there is a major improvement in this year’s model, which is the 30W fast charging support for the 5,000 mAH battery. 34 minutes of charging gets you from completely drained to 60%. If we compare it with Zenfone 6 (18W charging), Zenfone 6 needed 57 minutes to accomplish the same.

Also you can control your charging limit in this phone, just like other ROG phones from Asus. You can limit the maximum charge to 80% or 90% and also we can set a charging schedule so it goes slowly at night and fast charging in the morning. So, in the case of charging, you will have absolutely zero issue.

The Zenfone 7 duo is pretty sturdy with a series 6000 aluminium body, between two layers of glass. Also there is a support of GG6 on the front and GG3 on the back – Corning’s mot scratch-resistant glass.

These phones have a side-mounted fingerprint scanner. As the Zenfone duo has an OLED display, on display fingerprint sensor was not a bad option too. But it was the choice of the officials to make it side-mounted. Unfortunately, the 3.5 mm headphone jack was axed. But, you will get aptX Adaptive support.

The Asus will provide the Asus active cases to protect the phone and its flip-up camera. You don’t have to buy it. This case comes in the box itself. Coming to its release date, The Asus Zenfone 7 and 7 Pro will be released globally on September 1.

Global pricing will be confirmed in the upcoming weeks. As per officials, they may not be as cheap as we are hoping. These phones have such strong specifications which we can hardly find in most of the flagships. The OnePlus Pros also have stong specs but do not have expandable storage and costs are even more.