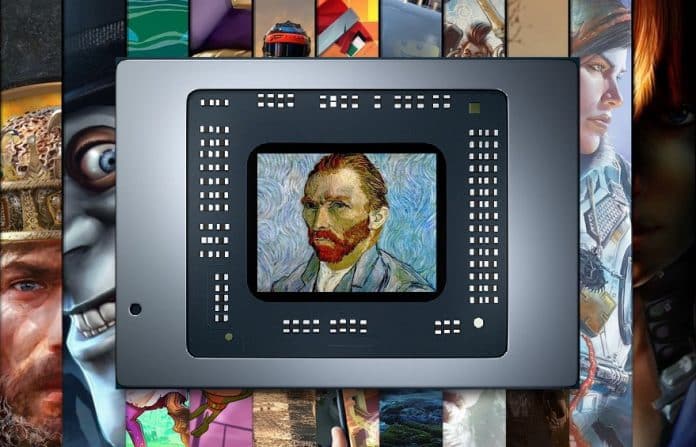 We have heard many things about AMD’s upcoming Van Gogh APUs that feature their Zen 2 cores paired with RDNA2 iGPU. This is a well-known combo we have seen on the newer Xbox and PlayStations, so AMD adapting it to notebooks isn’t surprising.

However, a new leak from Moore’s Law is Dead (MLID) on YouTube has given us some extra info about these new APUs. Previously, it was expected that these Van Gogh APUs would be on high-end gaming notebooks with specs similar to what we have seen on Xbox and PlayStations.

It is expected that AMD Van Gogh will be a low-cost, low-power APU drawing about 7.5 W to 18 W TDP. Considering the repeated leaks of Van Gogh APUs, MLID is confident that these APUs are real and are indeed in the works at AMD. However, it remains to be seen whether the actual product would make it to market in the midst of a global chip crisis.

MLID even confirmed that the iGPU would be based on AMD’s new RDNA2 architecture with 8 compute units (CUs). However, it remains to be seen how much performance improvement we could see when compared to its much-loved GCN-based Vega iGPU featured even on the latest Cezanne and Lucienne parts.

The low TDP also raises speculation, how these low-cost APUs perform in upcoming laptops or other products. It is also confirmed that Van Gogh will support LPDDR5 RAM for added graphics bandwidth as well as use the newer FF3 socket, which we also saw in the completely leaked AMD roadmap.

As Notebookcheck rightly points out, a Renoir quad-core Zen 2 CCX occupies just half the space that of a regular Zen 3 CCD, so in Van Gogh APUs, we could have enough room to accompany an RDNA2 iGPU. Van Gogh is important because it will bring RDNA 2 to iGPUs and this will be continued and improved in the upcoming Dragon Crest APU.

Even AMD plans to use RDNA 2 in their next-gen 6 nm based Zen 3+ Rembrandt APUs on laptops next year. So, the launch of Van Gogh by the end of this year, in fact, makes a lot more sense as RDNA 2 iGPU will be a common thing by the Zen 4 based Raphael desktop lineup.