“The Ice Age Adventures of Buck Wild”: Disney Plus has released the Warm trailer of the Prehistoric franchise 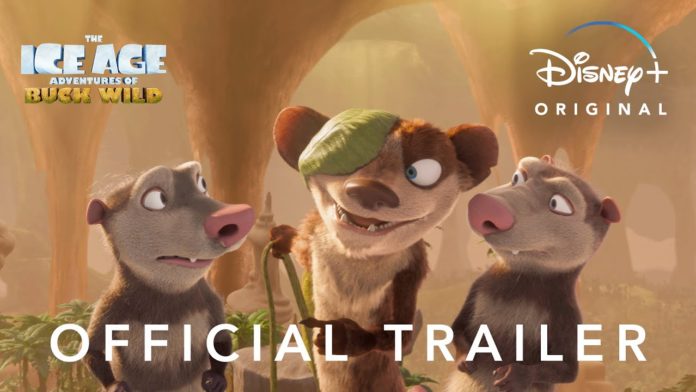 Disney Plus has dropped the latest trailer of the upcoming sixth instalment of the Ice Age franchise ‘The Ice Age Adventures of Buck Wild’ that was actually declared last year. It has returned some of the beloved characters of the franchise, and it provides such special focus to the adventurer Buckminster and has been voiced by Simon Pegg, and the two of the crazy possum brothers Crash and Eddie that are respectively voiced by Seann William Scott and Josh Peck.

The story of the film is perfectly revealed by a line of Manny’s who has played by ray Romeo, in the trailer, there is the word, “ Oh no! Those ding dongs went back to the lost world!” in this the Lost World has referred to the underground world of dinosaurs that the characters are accidentally found in dawn of Dinosaurs. It is mainly the Crash and Eddie that will be going to be live with an exciting adventure along with their mentor figure Buck.

The latest trailer just shows that Buck will be the new ringleader who has no fear of throwing himself into the death-defying adventures and also he puts himself in danger and also ends up with the need to be rescued by Ice Age Heroes Manfred, Eille, Sid, and Diego.

It shows all of this will just take place in The Lost World, “the most dangerous place on Earth” that is the room of giant predators, traps, and everything an animal who is not at the top of the food chain tries to avoid.

The voice of the animated film starred Utkarsh Ambudkar, Justina Machado, Vincent Tong, and Aaron Harris. The last duo is the new cast of possums Crash and Eddie and substituting Sean William Scott and Josh Peck. The latest prehistoric adventure has been written by Jim Hecht, Ray DeLaurentis, and Will Schifrin.

It has been directed by John C. Donkin and written by Ray DeLaurentis and William Schifrin, the vice cast is John Leguizamo as Sid the sloth, Denis Latifah as lovable mammoth Ellie, Jennifer Lopez as tiger Shira, and Jessie J as Brooke. It is not clear whether it will be the last Ice Age film since the last year after 20th Century Studios has been acquired, Disney has shut down  Blue Sky Studios, it is the animation studio behind the original film.

This animation Ice Age film will premiere on 28th January 2021 on Disney+.

Disney Plus with Ads scheme: All details about the price and many more