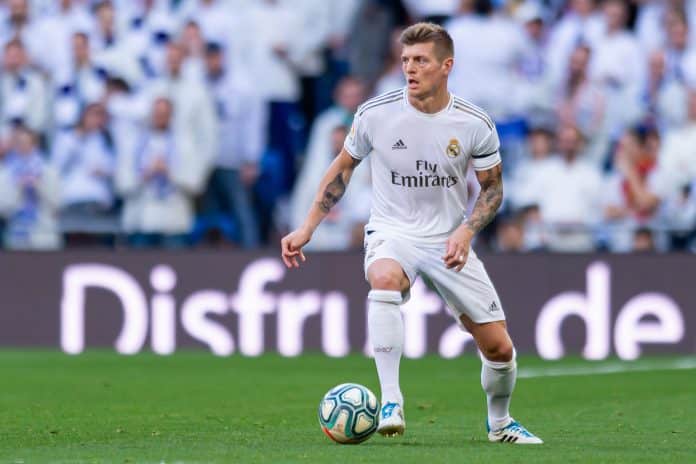 World Cup winning German Midfielder Toni Kroos left Bayern Munich after the World Cup in 2014. He was hugely influential in Germany’s World Cup win and his transfer to Real Madrid surprised many. They were confused about how could Bayern let their star midfielder leave.

Toni Kroos signed for Real Madrid in the summer of 2014 for a fee of 25 million euros after enjoying seven successful years at Bayern Munich. And now after 7 years at Real Madrid, Toni Kross has won multiple Champions League along with La Liga titles. He has established himself as a midfield maestro beside Luka Modric at the Bernabeu.

Toni Kroos’ agent Volker Struth revealed the inside story of his transfer to Real Madrid from Bayern Munich in 2014.

Struth told Bild, via Marca: “In September 2013, Bayern wanted to extend his contract but Toni didn’t want to.”

“They offered him 6m euros per season.”

“Did they forget that I knew they were paying Mario Gotze 10m a year?”

“We then asked for 10m euros and Pep Guardiola wanted to keep him. ‘I need you here’, he told Kroos and I assume he told Karl-Heinz Rummenigge the same.”

“In November I went to Munich and Rummenigge told me ‘Since we appreciate Toni so much, we’ll offer 6.5m euros a year’.”

“I told him ‘We won’t accept less than 10m euros’ and the conversation was over after 28 minutes.”

“After that, Uli Hoeness came onto the scene. After defeating Eintracht 5-0, Hoeness came into the dressing room and shouted at Toni, saying ‘Call your agent! You’ll never earn 10m euros here’.”

“Toni responded ‘I don’t need to call him, we have the same opinion’.”

“It was then clear than Toni wouldn’t be at Bayern that following season. We told the top clubs around Europe that Toni was for sale.”

“They didn’t believe us at first because how could Bayern let a player like that go?”

“He was the perfect man for Guardiola’s style of play.””

Premier League club Manchester United were in the best position to sign him. However, the sacking of their coach David Moyes and Real Madrid’s subsequent interest turned the situation on its head.

Struth said: “In April 2014, United sent a copy of a contract for Toni and David Moyes visited him personally.”

“United’s offer and contract were good, and Kroos had agreed to sign for Manchester United.”

“I still have the copy of the contract, with just Toni’s signature missing from it.”

“On April 22, United sacked Moyes and we had to start looking for a new club.”

“Finally, Kroos signed for Real Madrid in the summer of 2014.”