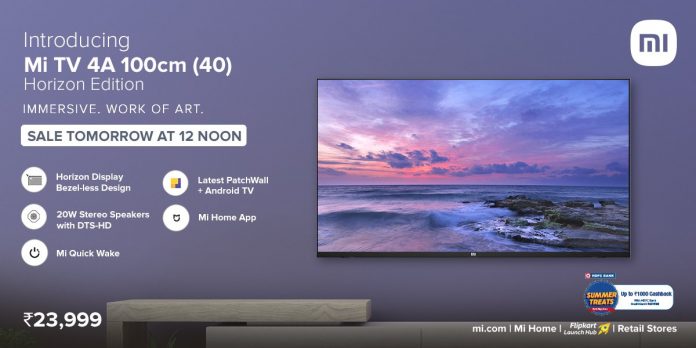 Smart TVs continue to be one of the fastest-growing segments in India. Today, Xiaomi expanded its portfolio with the launch of the Mi TV 4A 40 Horizon Edition. Xiaomi has been the biggest player in the smart TV segment since 2018 and continues to extend its lead.

The company last year had launched the 32-inch and 43-inch Horizon Edition TVs in India. And now, it is adding the 40-inch model to this lineup. If we have a glance at the specs of this newly announced Mi TV 4A 40-inch model, it has a bezel-less design and a Full HD resolution. Powering the Smart TV under the hood is the Amlogic Cortex A53 quad-core chipset which is paired with 1GB of RAM, and 8GB storage. On the software side of things, the Mi TV 4A 40-inch run Android-based Patchwall UI, and it has a built-in Chromecast. Let’s check out the detailed specifications, pricing, and availability of this newly announced TV by Xiaomi ahead:

As the name suggests, the Mi TV 4A 40 is a part of the Horizon Edition of smart TVs which have a strong emphasis on design. This time, Xiaomi has managed to offer an almost bezel-less design with a 93.7% screen-to-body ratio and 178-degree viewing angle.

The panel on this Xiaomi Mi TV spans 40-inches diagonally and has a Full HD resolution (1,920 x 1,080) along with the company’s proprietary Vivid Picture Engine for accurate screen calibration, deeper contrasts, and better colour reproduction. The refresh rate is 60Hz.

Under the hood, the Mi TV 4A 40 Horizon Edition has a quad-core Amlogic Cortex-A53 CPU, coupled with a Mali-450 GPU and 1GB of DDR RAM as well as 8GB of eMMC storage. The TV comes with a range of connectivity options including Wi-Fi 802.11 b/g/n, Bluetooth v4.2, two USB 2.0 ports, three HDMI ports (including one with ARC support), an Ethernet port, S/PDIF, and a 3.5mm headphone jack. The Mi TV runs on Android TV 9.0 with “an enhanced version” of PatchWall on top.

The Mi TV 4A 40 Horizon Edition is paired with a remote control that has dedicated keys to access various video streaming platforms. The smart TV also includes a preloaded Mi Quick Wake that is claimed to turn the TV on in less than five seconds and a Mi Home app to let you control your Mi smart home devices. It is also equipped with pre-loaded popular streaming services like Netflix, Amazon Prime Video, Disney+ Hotstar, and Live channel.

For audio, the Xiaomi Mi TV 4A 40 has two 10W speakers for a combined output of 20W, with DTS-HD. Ports such as a 3.5mm headphone jack (audio out), SPDIF, and three HDMI ports ensure that users will be able to have the experience they want.

The new Mi TV 4A 40 has been priced at ₹23,999 and will go on sale on 2 June at 12 PM. The TV will be made available via Flipkart, Xiaomi’s official website and Mi Home as well as other retail outlets. But the company has said in a statement that availability will be subject to the respective state government guidelines of serviceability due to lockdowns. The new Xiaomi smart TV sits between the Horizon Edition 32-inch variant and 43-inch variant which are priced at ₹15,999 and ₹25,999, respectively.

Launch offers on the Mi TV 4A 40 Horizon Edition include up to Rs. 1,000 instant discount on HDFC Bank credit & debit card and EMI transactions. Flipkart is also offering an exchange discount of up to Rs. 11,000 for customers buying the new Mi TV in lieu of an old smart TV.