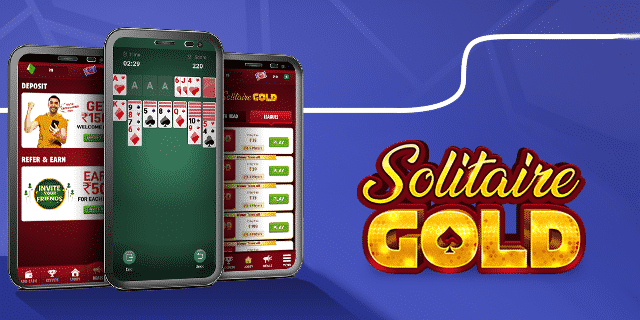 Card games have reigned as a source of entertainment for centuries. Since their inception, they have grown in popularity exponentially. In no time, they became ingrained in our culture and found a particularly prominent place in our everyday lives. A huge part of this story moving forward is how we have evolved into ardent fans of the game even on computers. Remember Microsoft’s solitaire launched in 1990? That was when solitaire became popular as a digital game.

A lot of gaming enthusiasts have switched to online gaming platforms like Solitaire Gold where you can also learn how to play solitaire if you haven’t played the game. Read on to understand how Solitaire Gold has changed the dynamics of the online gaming sector by introducing gaming perks like no other.

The biggest challenge when playing card games in the real world is to face the opponents without giving your emotions away. The portrayal of card games in movies shows how mysteriously the protagonist plays their moves, which makes the game look so appealing. It is often evident how interesting the game looks with some great opponents. That is the dream Solitaire Gold fulfils.

The app gives users an opportunity to test their gaming skills with real people rather than bots. Playing with real minds gives an enthusiastic spurt to what would have otherwise been a boring activity. The major advantage is that the real life drama is completely side-lined. An ugly brawl cannot take place in the online game. This is because the platform has a fair play policy, which prevents anyone from colluding or cheating.

So there are no hiccups in making bold moves, which is definitely encouraging and provides a seamless experience. Even beginners can try their hand by playing unlimited practice games and check out the guides and game tutorials on the platform to get the hang of the game.

Solitaire Gold is designed to provide a user-friendly experience. Brilliant graphics, coupled with multiplayer formats, give users a chance to play their best game and outperform a lot of opponents. It keeps getting better and more fun with each win. Head-to-head matches and league tournaments are great sources of entertainment.

The developers have made sure to take into account each factor to provide high quality and great experience. The app is designed to make it both easy and challenging for you, depending on the level you are at. This ensures fairly high standards in every aspect.

With thousands of skilled solitaire players from across the country putting their best foot forward on the platform, players can now compete with each other in what used to be a single-player game originally. You can utilize your solitaire expertise to defeat skilled players at the game and win big cash prizes.

The digital boom in the country has served the gaming industry well and people can now be a part of their favourite game online. Easy accessibility has mobilized even viewers to take note of the thrill games provide. People who thought card games were not their forte are now fully hooked on them. What could only be enjoyed with a physical deck of cards can now be played on the mobile phone in any corner of the world. This helps in attracting the interest of people of all ages.

As youngsters, we grew up seeing our fathers and grandfathers toggle amongst several card games and have a gala time together. We wanted to grow up quickly to achieve that level of camaraderie and entertainment. Here we are now. You only need to switch to an online network and download the app to get started. There are no preconceived notions. Just your smartphone and your smart brain!

The platform gives players exclusive bonuses and daily offers right from the time of registration. The perks include a huge welcome bonus of up to ₹1500, which is credited to your account once you make your first deposit. The Refer and Earn program is another game changer, where you can invite friends and get up to ₹500 for every successful referral. Anyone who is willing to play can sharpen their skills first by playing unlimited free games and then proceed to cash games to win real money in prizes. You can withdraw the cash you win very easily and quickly by placing a withdrawal request online.

It is perfectly legal to play solitaire for real money as the Supreme Court has declared playing skill games for real money legal. In fact, the law mandates an income tax on winnings of ₹10,000 or more in a single game. So it is absolutely safe and legal to play the game for real money, with the exception of a few states where state laws do not allow the residents to play real money games. Transactions are 100% secure with encrypted payment gateways like UPI, debit/credit cards, net banking and wallets. There is a dedicated support team to address all your queries and grievances 24×7.

With Solitaire Gold, you can have productive entertainment online. You can enter the world of thrilling gaming and enjoy playing solitaire online on your smartphone.