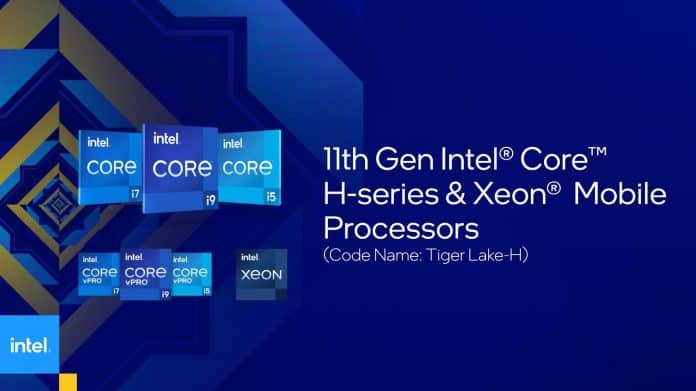 Intel has launched its new 11th Generation Core H-series mobile processors (code-named “Tiger Lake-H”) worldwide today, led by the flagship i9-11980HK. According to Intel, the Intel Core i9-11980HK will reach speeds of up to 5.0 gigahertz (GHz), delivering the highest performance in laptops for gaming, content creators, and business professionals.

The new Tiger Lake-H line will be based on 10nm SuperFin transistors and Willow Cove architecture, with a 19% IPC increase over Comet Lake-H. It will also be the first processor at 10nm to reach frequencies above 5.0GHz, demonstrating Intel’s advances with this new manufacturing node.

To get the most out of the GPU, Tiger Lake-H will also feature 20 PCIe Gen4 lines and a PCI-E 4.0 x4 SSD. It will feature an additional 20 PCI-E 3.0 lines for other peripherals. To allow you to gain great advantages over Comet Lake-H, the Tiger Lake-H will also feature integrated graphics based on Xe architecture, Thunderbolt 4, Wi-Fi 6E, and a host of new technologies.

As expected, the Tiger Lake-H line will be led by the Core i9-11980HK, which will be fully unlocked for overclocking via XTU and tools from different manufacturers. The Core i9-11980HK will feature 8 cores and 16 threads, a 65W TDP, 2.6GHz base frequency, 4.5GHz maximum turbo in its 8 cores, and a maximum turbo of 5.0GHz in a single core, achieving high performance as it is a laptop model. In addition, as mentioned above, it will have an unlocked multiplier, allowing you to overclock it even more.

More than one million 11th Gen H-series processors have been shipped to Intel partners worldwide by launch, whether it’s for high-refresh gaming, robust content creation, or mobile workstations. This represents a major influx of new silicon at a time when component shortages are rife.