India beat England by 66 runs in the first ODI 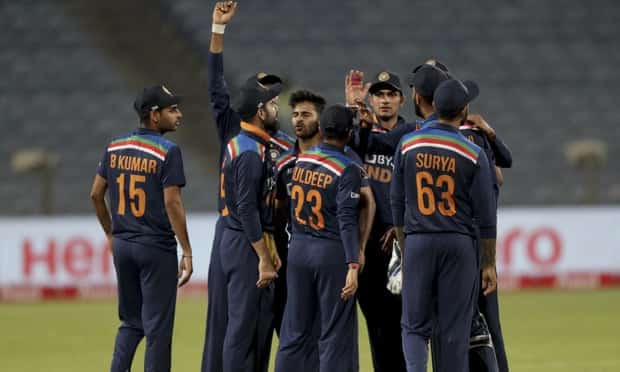 India took the lead in the ODI series against England by beating the visitors by 66 runs in the first ODI.

England won the toss elected to bowl first. Indian batsmen did a beautiful job to set the target of 318 runs for the win. Shikhar Dhawan [98 of 106], Virat Kohli [56 of 60] set the innings for India which was ended by a blistering knock from KL Rahul [62 not out of 43] and Krunal Pandya [58 not out of 31]. It was the debut match for Krunal Pandya as well which he marked with a half-century.

In the second innings, England started very well. England openers Jason Roy [46 of 35] and Jonny Bairstow [94 of 66] put up a 135 runs partnership and set the stage for the chase. But middle-order batsmen failed to capitalize on that. Indian bowlers did a great job to restrict them within 251.

After the match, Virat Kohli appreciates how his team made a comeback after a bad start. He said, “This is one of our sweetest victories in the recent past for how we made a comeback with the ball. Starting with Prasidh, going for runs, and then to make a comeback was an amazing effort.”

The Indian skipper also appreciates the debut performance from Krunal Pandya. He said, ” Krunal as well. 35 in the first three and to finish with only under 60 from 10 overs is a great effort.”

“Everyone else as well stepped up. As I have mentioned in the past as well, we promote players you keep backing players. Special mention to Shikhar as well, he has not got game time but he showed his skills today. KL as well did a good job. It is a healthy competition. For every slot we have 2 or 3 people available which is a great sign for Indian cricket. We want to go on a right path and we have a big pool of players to choose from. “- he told about the bench strength.