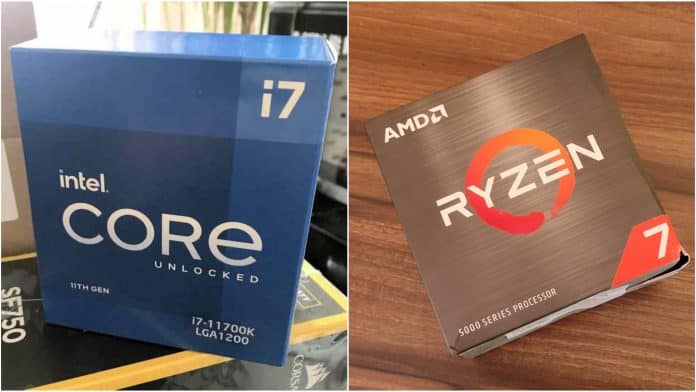 Intel is all set to launch its new Rocket Lake-S desktop CPUs in the coming days, and as we reported recently, Mindfactory is openly admitting the sale of these CPUs and has even admitted that no embargo has been breached in the process.

The people who bought these CPUs have posted in German tech forums like HardwareLuxx, PC Games Hardware, or ComputerBase. So, we have many early benchmarks of the 8-core Core i7-11700K, which could give us a fair idea of how these new Intel CPUs will perform against AMD’s revolutionary Ryzen 5000 series processors.

Andreas Schilling from hardwareluxx.de, has shared few benchmarks that suggest how Intel Core i7-11700K stacks up against AMD Ryzen 7 5800X:

This is true because, in our Ryzen 7 5800X review, it also scored 625 points in single-core whereas 5875 points in multi-core. So, indeed the Intel Core i7-11700K fails to beat AMD at early stages, and this is the same case in Cinebench R23 as well:

Here also we see the Ryzen 7 5800X beating Intel by fine margins both in single-core and multi-core tests. Not only this, in CPU-Z too the picture is the same:

Here we see both the CPUs having almost the same single-core scores at the stock, with Intel leading by few points, whereas Intel is far behind AMD in multi-core performance. These early benchmarks only give us some assumptions of the performance we can expect from these Rocket Lake-S CPUs, but the competition is very intense, no doubts!