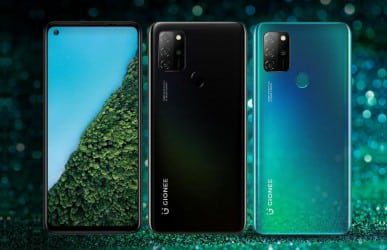 Finally, Gionee has launched the Gionee M12 smartphone in Nigeria this week. The phone offers two processor options as well as two storage options- one comes with Media Tek Helio A25 processor, equipped with 4GB+64GB storage and another one is equipped with MediaTek Helio A22 SoC with 6GB+128GB variants. Based on these options, the company has decided to set two prices for these two models. Let’s discuss the specifications and the price of this phone.

Gionee M12 sports a 6.55-inches IPS LCD HD+ (720×1,600)pixels of screen resolutions with aspect ratio of 20:9. The phone also has 91% of screen to body ratio. As mentioned above, this phone comes with two processor option- MediaTek Helio A25 and MediaTek Helio A22 (same silicon but with lower clock).

Coming to the optic part, Gionee M12 has a quad rear camera setup, including- a 48 MP GM1 sensor with an f/1.79 lens, which is limited to 1080p at 30fps video recording by the chipset, alongside a 5MP wide-angle lens(115 degrees) with f/2.2 aperture, and additional two 2MP assistant lenses. On the front side, the phone has a punch hole cutout at the upper left corner on the screen to hole a 16MP selfie camera.

The Gionee M12 comes with a decent battery backup of 5,100mAh, which will be supported by a 10W charging capacity. The phone also has a rear-mounted fingerprint sensor and as well as supports face unlock.

The phone has Dual-SIM(Nano) slot, which will be supported by 4G connectivity. Regarding the other connectivity options include- Dual-band Wi-Fi 5, Bluetooth 5.0, GPS, FM radio receiver, and a USB Type-C port for charging. The company offers two colour options- Dazzling Black and Magic Green.

Previous articleZTE unveils the ZTE Axon 20 4G, powered by the Unisoc Tiger T618 chipset
Next articleShould Germany look for a new coach after ‘Löw’ against Spain?

The GIONEE STYLFIT GSW5 Pro is now on the market