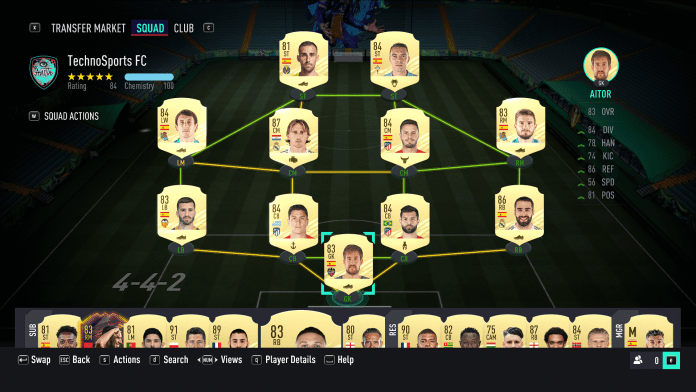 This is why we will be making FUT starter teams for various price ranges (as in FIFA coins) be it for LaLiga, Premier League or more. Here we will give you a tip to making your LaLiga starting XI in and under 100k coins for FIFA 21:

The defensive right-back who can run fast and has enough potential to tackle wingers from getting into your penalty box is none other than Dani Carvajal. Being a Spanish right-back, he has great chemistry with other players and helps a lot defensively. You can get him for as low as 19000 coins, and at that price he is a value buy.

You can get the striker for just 1000 coins but at that price he is a pretty handy option paired with Aspas. Alcacer could be used to make runs and give throughs to Aspas, else he his good at shooting to and can curve shots from long range as well.

So this completes our 100k coins LaLiga starter team for FIFA 21, and in the coming days, we will be bringing more such content. For any queries or suggestions, feel free to comment on this article…😊

If you have been playing FIFA 21 for quite some time now, you might have faced a lot of issues during the...
Read more
Football

What a difference a football manager can make to a club within a matter of just a few months! Just about this...
Read more
Football

FIFA 21 was released globally on 9th October, though the ones who had pre-ordered got access days back. EA Sports has done...
Read more

Barcelona has been through tough times both on and off the field. Although the appointment of Ronald Koeman as manager has improved...
Read more
Cricket

The smartphone brands are entering into the smartphone market day by day and it is continuing for over a few months. When...
Read more
Load more

Barcelona has been through tough times both on and off the field. Although the appointment of Ronald Koeman as manager has improved...
Read more