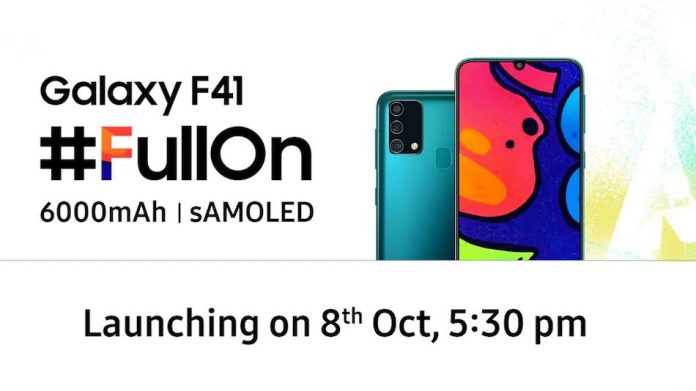 As per some of the reports from Samsung, the South Korean tech giant is going to introduce another series probably in the next month of this year. Samsung is all set to launch its new F series smartphones and the first member of that series will be Samsung Galaxy F41. According to reports, it is set to launch in India on October 8. Samsung claims that the upcoming F series smartphones will be camera-centric smartphones and it will be a blessing for mobile photographers. Some of the specifications of Galaxy F41 have already been leaked way ahead of its launch.

Recently a teaser page of Flipkart has revealed that Galaxy F41 will feature a triple rear camera setup, which includes a 64MP primary sensor with a single-take feature. The other two sensors are expected to be an ultra-wide angle sensor and a telephoto lens. For the selfie shooter, this phone will feature an Infinity-U design at the front. As per the leaks, F41 is expected to be powered by the Exynos 9611 SoC, have 6GB of RAM, and run on Android 10.

Regarding the connectivity and the other features, this phone will come with a USB-C port, a 3.5mm headphone jack, and a single bottom-firing speaker. Apart from this, one of the tipsters has also teased that the F41 will be offered in two RAM and storage configurations and also it will support fast charging. Looking at the specifications, it looks like the Samsung Galaxy F41 will be a rebranded version of the Galaxy M31. Regarding the pricing and availability, this phone is expected to carry a price tag between Rs. 15,000 and Rs. 20,000. We have to wait till October 8 at 5:30 IST to get every information about this phone during its launch.

Top 10 Smartphones with the Best Battery life in India