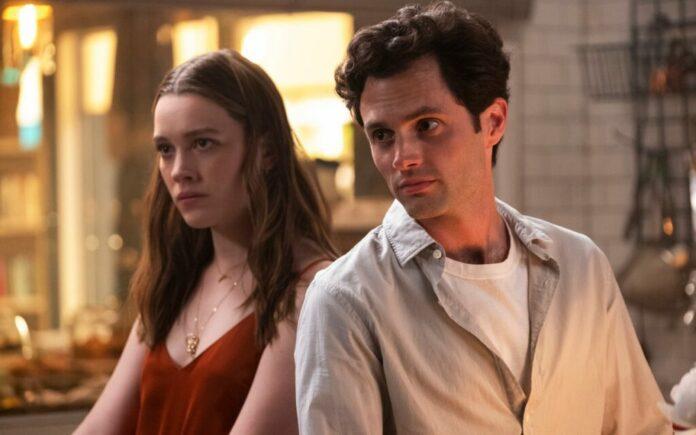 YOU are coming for the fourth season at Netflix and just wrapped up the shooting. Before releasing the third season of You, Netflix also exposed that they also had been renewed as a beloved crime drama for the fourth season. At the TUDUM event, it had exposed that season 4 going to split into two parts with the first coming in February 20023, and the second part will hit in March 2023.

You are Netflix’s Original romantic crime drama series made by Greg Berlanti and also revolved around the novels You and Hidden Bodies by the author Caroline Kepnes.

It seems that the series had been mainly on Lifetime before Netflix has been picked up the series as an original. After You landed on Netflix the popularity of the series has been exploded and watched by over 54 million households across the world.

Each season of You has seen Joe move to the location it has been unsettled deeply romantic serial killer, to Madre Linda, and finally to Paris, France.

The most surprising move made by Netflix is the announcement that You had been renewed for the fourth season came 48 hours before releasing the third season. Along with the announcement, Sera Gamble said,” We are deeply grateful that Netflix has shown You such monumental support, and that people around the world have enjoyed watching Joe really get it all very wrong over the past 3 seasons, said Gamble. ” The whole You team is excited to explore new dark facets of love in season 4.”

As the most popular originals of the Netflix library that there has no doubt like the You that also would not was always going to be made after the third season also landed like the case as it spoilt whatever was in store for Joe in season 3.

It is expected that the grand finale of You season 3 saw Joe and Love’s ultimately hostile relationship come to a climactic end along with Joe Switching continents in order to find his latest obsession, Marianne.

Joe once again changed their identity and also now going by the name of Nick. It is not very surprising as He would have to change his identity considering the name of Joe Goldberg-Quinn is famous in the USA thanks to Joe for successfully pinning all of the Madre Linda murders on love.

Now, rather Joe in Paris is searching for Marianne starts.; There is an expert stalker, Marianne needed in Paris and then Joe will find her sooner faster than later.

Marianne will be happy after seeing Joe?

While Marianne came across to the home and was confronted by Love, Joe also was incapacitated at the time. The fact is Love initially desired to kill Marianne’s daughter, Juliette which also swayed the hand of Love.

After resisting the urge to murder Marianne and it also seemed like Love was somehow able to convince Marianne of Joe’s wrongdoings, and as Marianne has never seen Joe incapacitated on to the floor of the dining room and it also will be with his word against Love’s while they meet.

It also provides the chance that Marianne may even believe that Joe is dead and also assume that she has been following the news of Madra Linda that also reported that Joe has been one of the victims of Love.

Marianne is not foolish. Seeing Je in the flesh while he has been supposed to be dead will rise serious suspicion and just not to mention as he would not even have just his son, now Henry that also Joe will somewhat have to convince Marianne that also leaving his son behind was what was the best for him.

Joe’s past triggers him

It is assumed that from one location to the next, wherever Joe comes a trail of bodies lies in his wake just like he had not necessarily killed them himself. It seems that how many people also have been directly or indirectly along with Joe also will have to catch up eventually.

It seems that the Parisian police are not going to be looking for a  dead man. It seems that Joe somehow finds himself in the custody and also with American authorities to be contacted and it would not take such lengths to put the two together just before they realize that Joe has faked his death and also fled from the country.

It seems not that hard to connect all of the murders from Madra Linda., to L.A., and also come back to his life in New York to then identify as a serial killer.

It is just like an and of the broad for Joe somewhere, and whether or not he finds “the one” would not matter manhunt out for him.  Somehow if he fails in Paris, then the only option Joe has the potentially flee to the Philippines where his ‘friend’ is the real Bettelheim living.

We should also point out such there have been a lot of rumors that season 4 also will take place in part in Paris. In an interview with Sara Gamble, EW pressed on the idea of season 4 being set in Paris saying:

It could I think Joe is great when he is in an environment that’s not natural to him, that’s foreign to him. So literally foreign could be very cool. And it’s a big wide world out there. That’s something I’ve learned from watching Netflix, where I’ve been watching shows from lots of other countries lately. It’s the thing about being in a pandemic. You are home. You can barely go down the street, much less get on a plane. And I have to say, it’s made us want to explore more of the  world in any way we can.”

It currently stands that the only confirmed cast member who also will be returning for the fourth season of You Is Penn Badgley. We completely expect Tati Gabrielle to reprise her role as Marianne in the latest season.

Currently, it stands for the only fixed cast member who can return for the fourth season of You are Penn Badgley.

It seems that in February 2022, it was declared that Lukas Gage had joined the cast of You Season 4.

Gage also will play Adam who is also an American expert and the little son of a wealthy East Coast magnate. He has been described as an entrepreneur and also a gambler, Adam is a warm and also funny party host and fast friend but just like Joe, also hides many secrets.

Lukas Gage is perhaps best popular known for playing Tyler on HBO’s Euphoria but you will also soon be seeing him on Peacock’s Angeline.

It was currently reported that ex-Eastenders across Tilly Keeper also will be joining the cast of You season 4. The keeper portrayed the role of Louise Mitchell on the soap British from 2016 to 2020.

She’ll be playing the role of Lady Phoebe in the new series, described as an “aristocratic socialite with an avid fan base, Phoebe’s true colors show when she’s alone with her friends”

The British actress Charlotte Ritchie was announced by Deadline to be joining the cast on March 25th. Best known for the series Ghosts, she’ll play Kate described as “smart, independent, suspicious, and misses nothing” and “an art gallery director whose job means managing tempestuous artists.”

Amy Leigh Hickman best known for Ackley Bridge will play Nadia, “a literature major with a love of genre storytelling and the aspiration to be a serious author.”

Ed Speleers who recently featured in Netflix’s Against the Ice but is also known for Outlander and Downton Abbey will play Rhys. Rhys is described as an “author whose memoir garnered him acclaim and pressure to launch a political career.”

Rounding out the newcomers includes:

On 10th November 2021, the writers confirmed that they also were back in business returning to their offices.

It seems that the Ins5agram post came   along with  the  picture below and the caption:

Gamble also took to Instagram to express her excitement at returning to the writer’s room saying:|”…and we are back. In a 3-dimensional office. Which is wild. The writer’s room opened today. Here is some office art. We will be over here going   full crazy for the foreseeable.”

It seems that in February 2022, we also got owed that the filming on the latest series is currently scheduled to begin in Mid-march 2022 and also run through to July 2022. In addition, our listing indicates that some filming could be taking place in the United Kingdom.

On 17th February, the You Writers account shared the first draft of episode 1 also written by Sera Gamble and Leo Richardson. When the episode title has been blurred out, some also have speculated that episode 1 “Joe Goes to Italy.”

As for the release date, You season 4 here is what we said in our production-declared article:

“If we look back at the production schedule for season 3, it wrapped in April 2021 and then aired that October. If we also apply such similar timeframes to season 4 as it means we would not likely see it added until December 2022 at the earliest or what we believe is more likely in early 2023 again along with the caveat with the production schedule are b subject to change.”

It seems that the filming of the fourth season of You started a little more than expected and started on 22nd March 2022.

We have expected that it will wrap up on 31st August 2022. The show has confirmed the filming season contains the London University in the UK.

On 26th August 2022, the filming wrapped for the fourth season of You!

Netflix also has not revealed the renewal declaration with season 4 being the last we will see of Joe. As it stands there is also such a chance as we could see more of You in the near future.

Netflix declared two sets of release dates for You season 4! In this new season, we are going to split into two parts but the two dates have been shifted from the two announced art Netflix’s TUDUM event.

Recently, in a subsequent poster, both the dates have been shifted one day ahead:

According to the account class, these dates are the syllabus for Season 4 sneak peeks.

Read More: Money Heist- Korea Joint: Everything We Need to Know about the Korean Adaptation of the Series