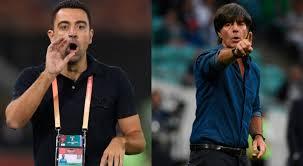 In a recent interview with the German newspaper Sueddeutsche Zeitung, he said, “Löw is made to train Barcelona because of his way of understanding the game and his personality.”

“Löw did his bit for Germany to develop a different way of understanding football that reminded me of the one I knew in the National Team and in Barcelona.”- he added.

“It is normal that there is some wear after such a long period.”

It is a strange claim from the side of Xavi Hernandez. Xavi himself is linked with a return to the Catalan Side to take charge of FC Barcelona. Xavi was set to become FC Barcelona manager to replace Ernesto Valverde before Ronald Koeman arrived in 2019.

However, the former Spanish midfielder is currently managing Qatari club Al-Sadd. He is not prioritising an immediate return to Catalonia currently.

On the other hand, Ronald Koeman is having a tough time in FC Barcelona. If the Catalans failed to win without silverware, Koeman can be sacked immediately. In that case, Xavi can be a perfect replacement. But after his recent interview, FC Barcelona can think otherwise.

Joachim Low is highly successful as the manager of the German National Team. Germany has won the FIFA World Cup 2014 by beating Lionel Messi Argentina in the final. It will be interesting to see him as the boss of FC Barcelona.

- Advertisement -
Powered by JustWatch
Share
Facebook
Twitter
Pinterest
WhatsApp
Linkedin
Previous article
FIFA 21: How to do the 88-rated Rodrigo Palacio FUT Birthday SBC card and is it worth doing?
Next article
‘Sir Alex Ferguson: Never Give In’- A New Documentary on Manchester United’s legendary manager