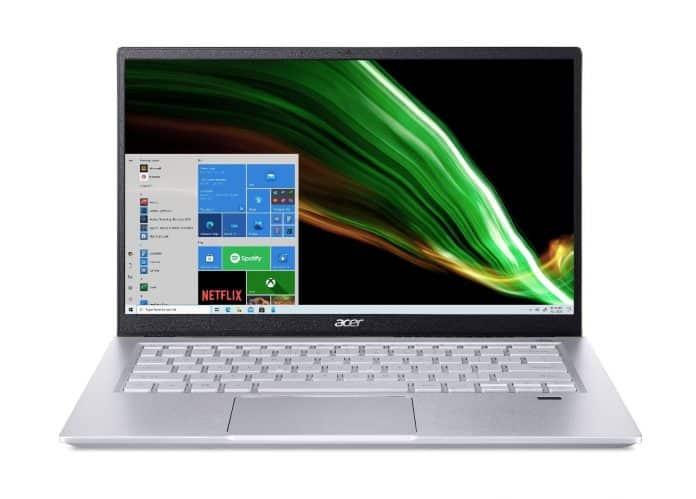 A lot of days have passed since AMD launched their Ryzen 5000U mobile processors at CES 2021 and although we have seen some laptops hitting the market a lot of them are yet to be launched. Acer brings a lot of affordable and premium notebooks with these AMD processors and now an upcoming Acer Swift X laptop has been spotted.

WinFuture has spotted the laptop on the Acer Thailand website and the Swift X lineup is said to sport 14-inch displays, powered by AMD Ryzen 5000U processors, as well as come with Nvidia GTX discrete GPUs.

As of now only one variant of the laptop with product code SFX14-41G-R3AD has been confirmed, featuring an AMD Ryzen 5 5500U hexa-core processor, 8 GB of LPDDR4X RAM and 512 GB of NVMe SSD storage, and an Nvidia GTX 1650 discrete GPU.

It comes with a 14-inch FHD IPS display and an integrated HD webcam. The laptop specs coincide with the Acer Aspire 7 launched in India few months back, but the Swift series is more premium in both build quality and battery life than Aspire series.

For ports, you have 2x USB-A 3.2 Gen 1 with charging capabilities, a USB-C 3.2, an HDMI 2.0 video output and a headphone jack. On the connectivity front, you get the latest Wi-Fi 6 and Bluetooth 5.2 support whereas you still have a fingerprint reader, backlit keyboard and a 59 Wh battery that should give enough battery life.

The laptop said to have come with a Safari Gold colour scheme and weigh just 1.39 kg. As per WinFuture, Acer also plans to launch a Swift X variant powered by the Ryzen 7 5700U APU coupled with 16 GB of LPDDR4X RAM. As for the prices, while the Ryzen 7 model might cost around US$1,000 as the AMD Ryzen 5 5500U powered model is already listed for around ~US$900 price.