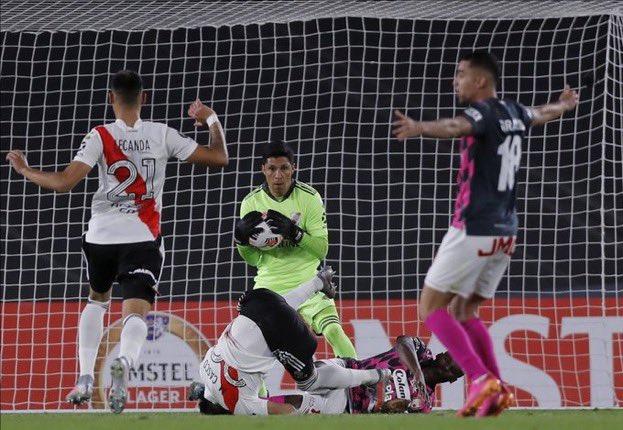 You can never truly call a match in football, and River Plate’s performance against Santa Fe last night showed just that. The club was hit with a disastrous situation that ruled out 20+ players in the team, all of them contracting COVID cases.

Among them were the four goalkeepers named by the team. While a fifth and sixth goalkeeper were requested to be included in the sixth, the advances were rejected by the South American Football Board (CONMEBOL).

Incredibly, the squad was reduced to 11 fit players with no fit goalkeepers. Hence, midfielder Enzo Perez played in goal through a hamstring injury. Lady luck compensated the wave of injuries by letting River Plate pick up the win on the night, with the scoreline reading 2-1.

Perez was named the man of the match due to his appearance and performance in goal. And due to the squad only consisting of 11 fit players, nobody was on the bench and there were no substitutions to be made.

River Plate now go to the top of the Copa Libertadores, which is the South American continental club competition (Champions League equivalent). They have accumulated nine points from five games in group D.

Fabrizio Angileri and Julian Alvarez scored three minutes and six minutes into the game respectively to put River Plate ahead. The match was surprisingly going in the favour of the depleted team, but Kelvin Osorio pulled one back to give them a late scare. However, River Plate held on to secure a magnificent victory with all possible odds stacked against them.

Julian Alvarez to join Manchester City for €18.5m in the summer