Real Madrid 2-1 Barcelona, what went down in the 264th El Clasico 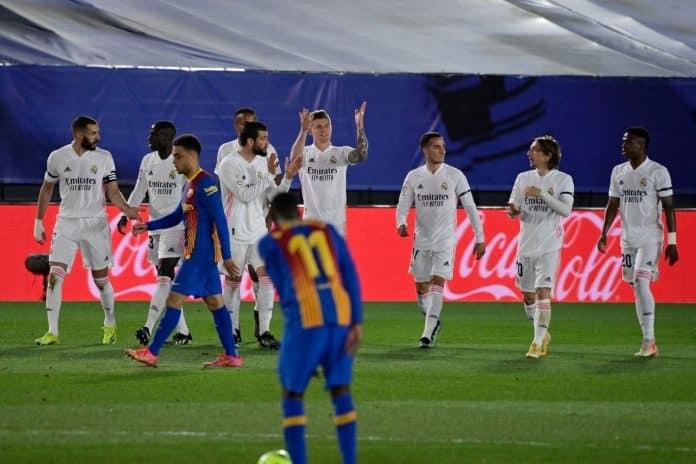 Real Madrid completed the league double over arch-rivals Barcelona in the 264th EL Clasico to push themselves up to the top of the La Liga table. This victory sees the Blaugrana fall only a point behind Madrid in the race for the title, but it was an important victory nonetheless and could be the match to seal the title in their favor.

Karim Benzema opened the scoring early with a fabulous backheel finish following a cross from Lucas Vasquez to continue his red hot form. Toni Kroos then doubled the lead for Madrid from a free-kick situation. The ball struck the wall and was accidentally headed in by Jordi Alba, who could barely move considering the pace with which the German struck the ball.

Barcelona managed to pull one back thanks to Oscar Mingueza’s tap-in finish, following a slick delivery from the left flank, but it was not enough to salvage even a point from the game.

Lionel Messi almost scored from a corner, but the Argentinian was denied arguably the greatest goal in Clasico history by the post. And that would prove to be the case throughout the night, with the visitors striking the framework on multiple occasions. Most notably, Ilaix Moriba hit the post right at the death, which took away Barcelona’s chances of leveling the scoring.

Madrid had to fight hard to win against their rivals amidst the lashing rain that came down midway through the match and continued till the end. Casemiro was sent off for accumulating two yellows at the 90th minute but it was too late for Barcelona to capitalize.