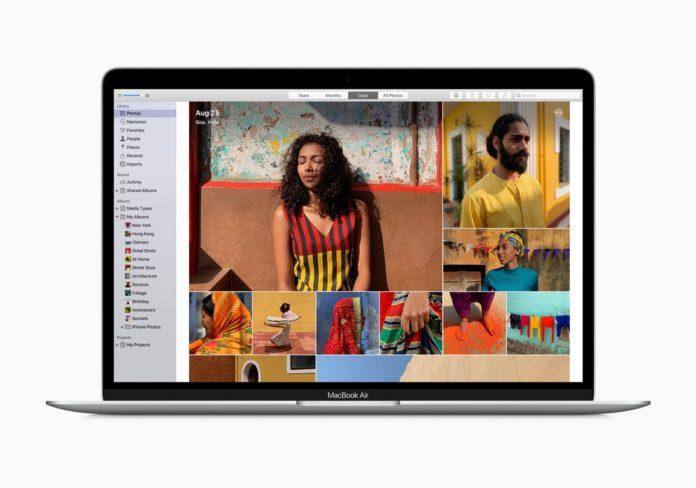 Apple’s latest MacBook Air laptops got an upgrade on March this year, featuring the latest 10th Gen Ice Lake CPUs and few key upgrades. Finally, these laptops carry a cheaper price tag and they are now available in India via Amazon, starts at ₹ 92,990.

In terms of design and display, there’s almost no change since last-gen, featuring the same 13-inch True Tone Retina display. It also has the Touch ID, a Force Touch trackpad, two Thunderbolt 3 ports and promises an all-day battery life.

Apple has skipped its outdated Amber Lake-Y processors that it included in last year’s MacBook Air to the newer Ice Lake-Y architecture which is based on the latest 10 nm process, the Ice Lake-Y series CPUs can run at up to 9W TDP on up to four cores.

The new MacBook Air delivers promises up to two times faster CPU performance, as Apple is using custom Intel silicon without stating the actual name of the lineup says to be offering Core i3, Core i5, and Core i7 SKUs only.

So, as this is an Ice Lake CPU, it features Intel Iris Plus Graphics which Intel does not offer currently on its Core i3 Ice Lake-Y processors. This helps the new MacBook Air to deliver up to 80% faster graphics performance than last-gen.

This is accompanied with LPDDR4X 3733 MHz RAM and Apple offering 8GB RAM as a standard option along with 16GB RAM option as well. Likewise, the MacBook Air now starts with 256GB of SSD storage and can be configured with up to a 2 TB SSD.

Talking about the new Magic Keyboard which Apple has borrowed from the MacBook Pro 16, it features a redesigned scissor mechanism that delivers 1mm of key travel for a comfortable and stable key feel. On the other hand, the new inverted-“T” arrangement for the arrow keys makes it easier to find without looking down.

The new MacBook Air also features a unibody wedge design made from 100% recycled aluminium and comes in three finishes including gold, silver and space grey. Also, it has the same all-day battery life which MacBook Air is known for.