Liverpool FC Sale: Indian businessman Mukesh Ambani, the eighth-richest man in the world worth £90 billion, is in talks for a takeover bid 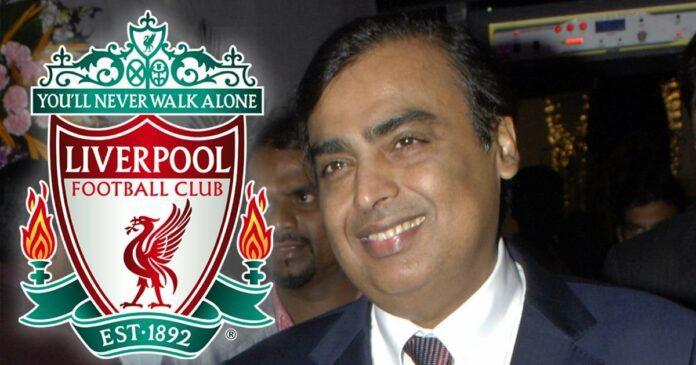 Liverpool could be set for an Indian takeaway with multi-billionaire Mukesh Ambani’s interest in buying the club. Ambani, with a net worth of around £90billion and rated by Forbes as the eighth richest person in the world, has already enquired about the club.

But he will have to fight off interest from other parties from the Middle East and the USA with Liverpool‘s current owners Fenway Sports Group having been swamped with tentative offers.

Ambani is in the race to buy Premier League club, Liverpool

Liverpool’s current owners Fenway Sports Group have been surrounded with tentative offers, as soon as they announced their decision to sell the club. There have been offers from the Middle East as well as the USA. It is understood that the current owners value the club at £4 Billion.

However, Mukesh Ambani is a huge sports fan and that figure will not put him off. He owns Indian Premier League cricket giants Mumbai Indians and helped to set up Indian football’s Super League. After completing the purchase of Mumbai Indians he was labelled ‘The World’s Richest Sports Team Owner’.

In 2010 Subrata Roy and Ambani were lining up a bid to purchase 51 per cent of the club’s stake from former owners Tom Hicks and George Gillett. Ambani currently owns IPL cricket giants Mumbai Indians and also played a key role in setting up the Super League in his home country.

Earlier this week, Klopp spoke about the potential of Liverpool getting new owners. The German admitted the club had no choice but to spend to keep up with the likes of Manchester City.

John W. Henry’s FSG are willing to transfer ownership of the club for £4 billion – a figure that may not scare Ambani. The current owner’s decision to sell the club comes after Liverpool’s poor start to the domestic season.

Despite winning two games on the trot – against Tottenham Hotspur and Southampton – the Reds are still sixth in the table with 22 points from 14 games. Fans have been vocal with their demands that the club spend big in the upcoming transfer window to refresh the Reds’ ageing squad.

A man as rich and success hungry as Ambani will pump millions into making sure that Liverpool is competing with the best clubs in Europe. This will be a sigh of relief for the Liverpool fans, who believed that the FSG sports group were not allowing Jurgen Klopp to get the players he wanted.

In order to buy the club, though, he will have to fend off offers from interested parties in the United Arab Emirates, Bahrain and the USA. Investment banks Goldman Sachs and Morgan Stanley have been employed by the Reds’ owners to test the water over any interest in buying the club and potentially completing a takeover.

Mutual Funds That Are Exposed To Adani Stocks!