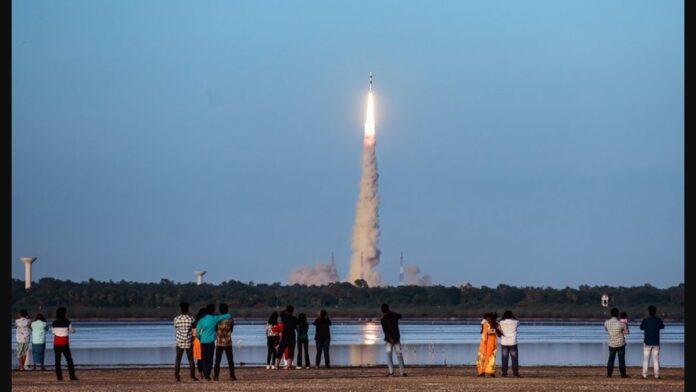 Indian Space Research Organisation (ISRO) chairperson S Somanath said: “Sixteen (satellites) have been separated very safely as we expected and the remaining 20 satellites will be separating when we are not able to see it from this place (the rocket will be on the other side of the earth) and the data will come a little later.”

On Sunday, at 12.07 am in Sriharikota, off the coast of the Bay of Bengal, it was almost like an early Diwali, with the sky lit up by the launch of 36 OneWeb satellites. The Indian Space Research Organisation (Isro) did the launch on a 43.5-metre-tall Geosynchronous Satellite Launch Vehicle Mark III (GSLV Mk III) rocket.

After the countdown, which started 24 hours in advance, once the mega screen marked the launch, a select group of invitees at the gallery cheered by applauding the feat. The 36 communication satellites were placed on the low-earth orbit as part of the OneWeb India-1 mission, or the LVM3 (Launch Vehicle Mk III) M2 mission.

ISRO the Indian Space Research Organization has been blessed with innumerable capable scientists from APJ Abdul Kalam to K Sivan and the present Chairman S Somnath but they have always hurdled for funds and opportunities to perform research and incentives to endeavour new space programs.

Dr Nair said: “The mission demands the separation of all 36 satellites into the 600-km orbit and the separation has to be sequenced in such a way that the customer requirement of minimum 137-metre distance between any pair of satellites is maintained. This is achieved by orienting and reorienting the cryo stage (third stage of the rocket) using the on-board thrusters.”

OneWeb, formally known as Network Access Associates, is the UK-based customer of NSIL, Isro’s commercial arm, and a global communication network powered from space, enabling internet connectivity for governments and businesses. Bharti Enterprises is one of the major investors in OneWeb.

The GSLV Mk III is reportedly a three-stage rocket with the first stage fired by solid fuel, the second by liquid fuel, and the third in cryogenic mode. OneWeb satellites are arranged in 12 orbital planes with 49 satellites in each plane on a 1,200-kilometre circular orbit. The company is implementing a constellation of low-earth orbit satellites and will have 648 satellites.

The Chandrayaan-3 mission is India’s third space venture targeting the moon. Although it was supposed to launch in late 2020 or early 2021, it was reportedly delayed due to the pandemic.