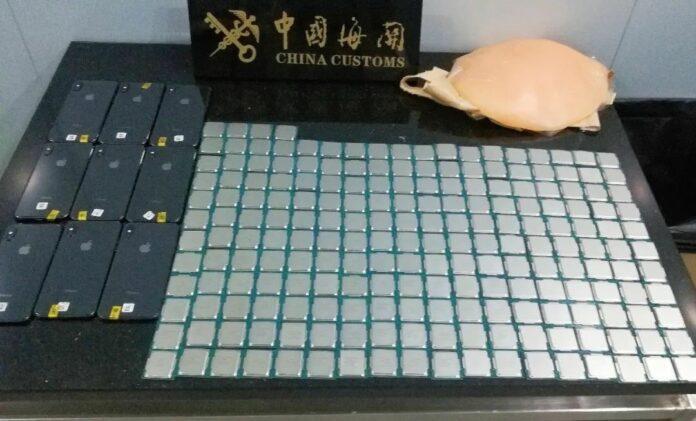 While some transport narcotics and exotic animals, a Chinese woman accepted to be a mule for processors. According to Mydrivers, Chinese customs officials caught a lady who attempted to smuggle 202 Intel processors and nine iPhones fitted inside her prosthetic tummy.

The incident occurred in Zhuhai’s Gongbei Port, where a presumed pregnant woman attempted to return to mainland China from Macau. The offender claimed she was five months pregnant; nevertheless, her tummy was enormous for the reported gestation period, and she was walking effortlessly, raising several eyebrows.

Customs officers then discovered that woman had used duct tape to repair and conceal illicit goods behind the artificial silicone tummy. In any case, she wouldn’t have gotten away with it because an X-ray image analysis or a metal detector would have caught her.

The officials seized 202 Intel processors, which look to be Intel’s 12th Generation Alder Lake chips, which remain among the best CPUs for gaming.

There were also nine iPhones among the spoils. This isn’t the first time we’ve heard about Chinese hardware traffickers. In March, a man tried to avoid customs by taping 160 Intel CPUs to his body. Last year, Chinese customs officers apprehended a suspicious fishing boat attempting to smuggle 300 graphics cards into mainland China.

Surprisingly, practically every report in the last few years included crooks attempting to smuggle Intel chips. We can’t remember the last time we heard of someone smuggling AMD processors. However, given Intel’s client market share and latest technology, it is impossible to dispute that an Intel processor is the more appealing item to chip mules.