From Human to Detective Boomrah: Most fascinating OTT Web Series to be released in January 2022 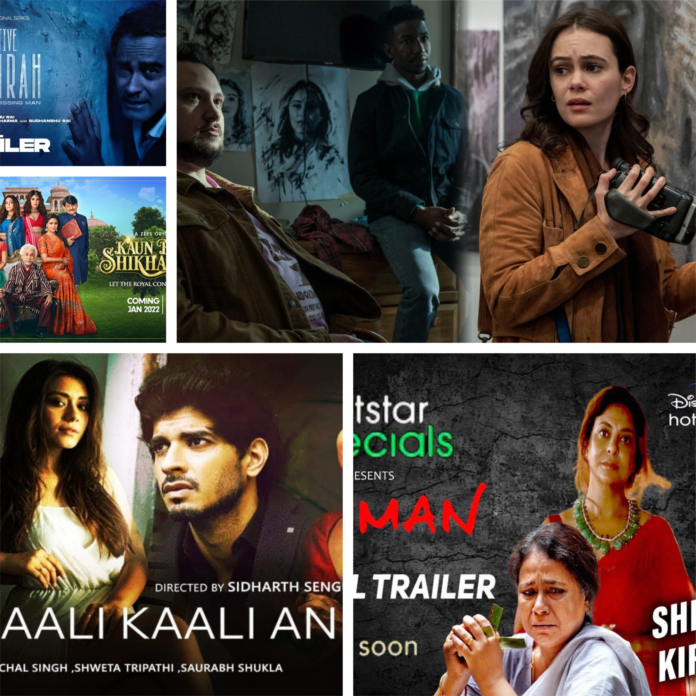 The rising number of active cases suggest that the best bet to ensure our dose of entertainment, we should stick to binge-watching our favourite movies or series on OTTs.

To make the selection easier for you this season, we have compiled a list of some of the top OTT releases to be released and must watch in January 2022. The list has everything from a rib-tickling laugh riot to detective series to supernatural thriller, check it out.

The story is about a video archivist – Mamoudou Athie – who is called upon to restore a recently-acquired collection of videotapes damaged in the fire. The work is supposed to be done at a remote research facility because the goods are very fragile. As the artist begins his work, he comes across a tape that is possessed. In an old video about a building appears a mysterious character that changes his life upside down. The trailer can be watched on the official YouTube channel of Netflix India. The supernatural thriller releases on January 14.

One of the most interesting trailers released recently – Yeh Kaali Kaali Ankhein – is the story about a young man – played by Tahir Bhasin – who is stuck between a woman who loves him (Shweta Tripathi) and one who desires him (Anchal Singh). In the words of one of the key characters, played by the versatile Saurabh Shukla, the protagonist is a trophy that can only be won by her daughter. And if that is not all, the lead, played by Tahir Bhasin, further gets entangled into an enmity that makes him run for his life. The trailer can be watched on the official YouTube channel of Netflix India. The thriller drama releases on January 4.

Time is the mightiest of all when it takes a turn, we are left hanging some in between like puppets – the trailer of this intriguing web series begins with these words by the protagonist of the story – Detective Boomrah, played by storyteller-turned-actor and filmmaker Sudhanshu Rai. The detective along with his partner Sam (Raghav Jhingran) is investigating the case of a mysterious man (Akhlaq Ahmad Azad), who appeared out of nowhere in a heritage hotel room and then jumped from a terrace to be found nowhere. The other cast of the web series includes Shobhit Sujay, Abhishek Sonpaliya, Manisha Sharma, Garima Rai and Priyanka Sarkar. The trailer can be watched on the official YouTube channel of Kahanikaar Sudhanshu Rai. The detective thriller premieres on January 21.

The web series starring critically acclaimed actors like Shefali Shah, Seema Biswas, Kirti Kulhari and Ram Kapoor, among others is based on the fact that the business of saving lives comes at a dear cost of taking a lot many. While there’s nexus involved, some innocent youth consider it a medium of quick and easy money. The chaos breaks when many people start dying in the course of drug testing. The trailer can be watched on the official YouTube channel of DisneyPlus Hotstar. The gripping medical thriller premieres on January 14.

Our ancestors defeated enemies in war but I have conquered death and that is why my name is Mrityunjaya – the trailer begins with these words by the protagonist – an erstwhile king of a dysfunctional family played by Naseeruddin Shah. His world turns upside down when he receives a tax notice with a hefty fine to be deposited within a month. His manager – Raghubir Yadav – suggests him to call his daughters – Lara Dutta, Soha Ali Khan, Kritika Kamra and Anya Singh – to save his family legacy – the Shikharwati. The trailer can be watched on the official YouTube channel of Zee5. The rib-tickling crazy family riot premieres on January 7.

Turtle is the tale of a man who swears to build a stepwell in a drought-struck village in Rajasthan where anyone and everyone would end their thirst without shedding a single penny. Based on a real story, the vow is taken by Ramkaran Choudhary, played by the evergreen Sanjay Mishra, who gets the support of his family that gets sort of ostracized by the village. The cast includes Amol Deshmukh, Ankit Anil Sharma and Monica Sharma, among others. The trailer can be watched on the official YouTube channel of Zee5. The drama movie is already streaming.