FIFA 21: How to do the 92-rated Hirving Lozano Serie A TOTS SBC card and is it worth doing? 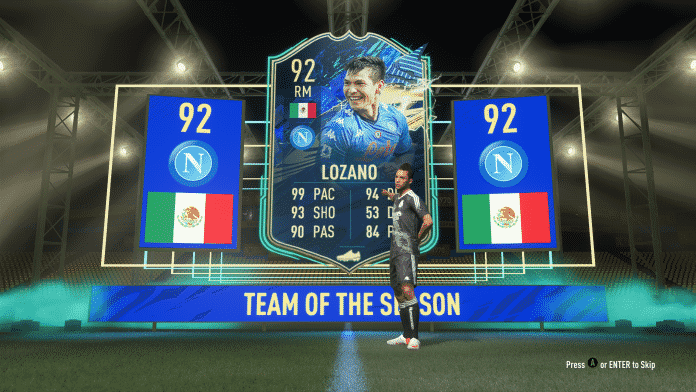 So now after Bundesliga and Liga NOS TOTS, it’s now time for the Serie A Team Of The Season. EA Sports released the Serie A TOTS on Friday, 21st May at 10:30 pm IST. Check out the full team in my other article.

They have now also released a great SBC for 92-rated RM Hirving Lozano.

The Hirving Lozano card, right from its base FIFA 21 card, is very good in-game. He has multiple Team Of The Week cards over the year and his lighting pace makes him one of the best wingers in the game if you prefer pace, which obviously is a big factor in FIFA 21. So you can probably guess how good the 92-rated RM card will be in-game and it requires just two SBCs – 84 and 86 rated.

Let’s take a look at the card in details.

The Hirving Lozano 92-rated RM card has a high attacking work rate and a low defensive work rate. It also has a 4* skill move and 4* weak foot.

The main part of the card is his max pace – 99 acceleration and 99 sprint speed. But what stands apart for him compared to the other 99 pace card is the excellent shooting, passing and dribbling stats.

The card has 99 agility which will be very helpful to glide past defenders using his pace. He also has 99 stamina, so it won’t be difficult for him to run up and down the field throughout the 90 minutes. He can run in from the right side towards the goal and can shoot and even provide excellent crosses.

As you can see, I have played 12 FUT Champions matches with him, and he has been excellent for me, scoring 5 goals and providing 8 assists. You should definitely do this card and can easily connect him with top class Serie A players.

The SBC is also less expensive compared to the others. So if you have the coins or the players, Hirving Lozano 92-rated RM Serie A TOTS is a must-do SBC.