FIFA 21: How to do the 88-rated Rodrigo Palacio FUT Birthday SBC card and is it worth doing? 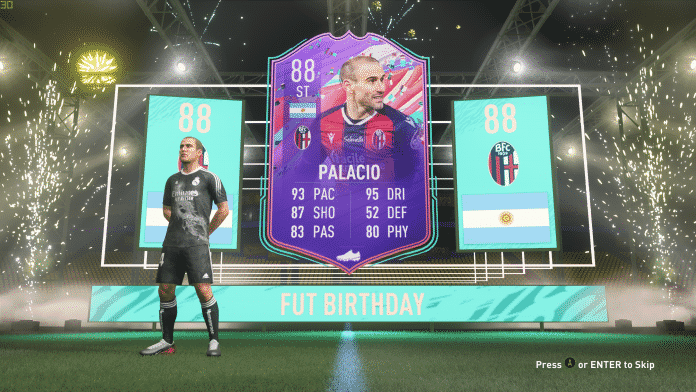 The FUT Birthday promo is live in FIFA 21 since 26th March. It is one of the most anticipated promos, but Team 1 hasn’t been good enough, and fans are expecting more from Team 2, which will be released next week.

FIFA 21 has now introduced Rodrigo Palacio’s FUT Birthday SBC. The Argentine international currently plays for Serie A side Bologna, so it will be pretty easy to connect him with other players.

Rodrigo Palacio’s FUT Birthday card comes around 200k FIFA coins as it requires 83 and 85-rated squads, which is quite cheap considering the other SBCs coming out in FIFA 21.

Getting a Rodrigo Palacio card from such a decent SBC is an absolute win, and on top of that, he has great stats. Let’s get into it in details.

Rodrigo Palacio has a high attacking and defensive work rate which is the best in-game. He also has a 5* skill move which would be awesome while taking on your opponents. The only downside is the 3* weak foot, but it is manageable. So this card is an absolute beast considering the work rate and the skill move.

Now coming into the in-depth stats of the card. The two things which stand out in the card is his pace and dribbling. He has 93 pace along with 95 dribbling to assist his 5* skill move. His shooting is also pretty decent with excellent attacking position and finishing.

Being a striker, he wouldn’t be required to deliver pinpoint passes as he will usually be at the end of the passing move to convert it into a goal. He also has a leadership trait along with a finesse shot, which will be very helpful in bending the ball into the net. I have put a hunter chemistry style on him to improve his shooting and make his pace more deadly.

As Rodrigo Palacio is from Argentina and plays for Serie A side Bologna, it was pretty easy for me to fit him into my team. He gets a green link from Dybala and a yellow link from Cristiano Ronaldo, and my front three are well-connected.

I would suggest you all to do this card as this is an absolute beast. With a 5* skill move and 95 dribbling, he can dribble past almost everybody. Along with that his 93 pace would allow him to glide past any defender. Everything in this card is excellent except the 3* weak foot, but that won’t be a big issue.

FIFA 23 – TOTY: Official Team Of The Year XI revealed along with their overall ratings

FIFA 23: Full Team Of The Year XI leaked; Here’s a look at all the TOTY player stats in detail