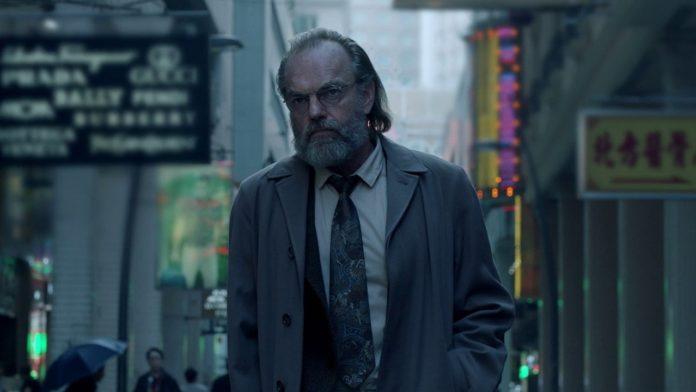 The trailer of the new Sci-fi film expired has been released. It is true that the glaring absence of Hugo Weaving in the role of Agent Smith in the Matrix Resurrections had been a major letdown. The fans of the actor will be getting soon to watch him with the other futuristic thriller.

It has set that Weaving has been set to play the part of such a reclusive scientist in Lions gate’s new sci-fi thriller.  After looking at such the first official trailer of the film that character is dipping in all of the shades of such creepy and also has been enveloped into an air of such mystery thanks to Weaving’s standardly exceptional performances.

The trailer of the film has seriously given some vibes of Blade Runner with such of the air-borne vehicles against the backdrop of the city’s high skyscrapers. It is like imagining the future of humans that is relating with such deterioration with a point from where everyone becomes concerned about themselves and love become a myth limited for the stories in the past.

The character Jack takes the decision to embrace this selfish lifestyle to become a hitman and kill people for money with his conscience burring deep under the desperation of surviving. Fate soon brings him across April and Doctor Bergman.

The trailer also reveals  Jack meeting with April who is a nightclub singer and eventually the two become fall in love. Soon, Jack just notices that something he feels is wrong with him as his body of him is deteriorating and the process speeding up by depending upon the time for spending with April and also about the closer that he gets to her.

For knowing the cause behind such a mysterious disease, Jack starts to seek out  Hugo Weaving as Doctor Bergman who is a life extension scientist living an isolated life. Latter it shows that the hitman is the target of some strong and dangerous people who are infecting him deliberately.

Now if he desires to survive then he has to stay away from April but for Jack, that becomes an impossible task like he had been experiencing love for the first time in his life. He takes the decision for going after the very corporation that is desperate to hunt him as Bergman warns him and Jack is quickly deteriorating that does not take much time. The character of  Hugo Weaving is seeming to have such hiding secrets with his own and also will be on the radar of such a corporation that is also chasing Jack.

In 2020, on a chat wi8th collider Hugo Weaving said about his experience of reuniting g  with Ivan Sen, after getting worked with the director in 2013’s Mystery Road. The director also shared that he always found    Sen to be ” a great filmmaker” and he was really looking forward to working with him again. This is the major reason behind  Weaving saying yes to Expired which was titled mainly, Loveland.

This sci-fi thriller film has set to release on 18th March 2022 in selected theatres.

A Big thanks for the source.

“Solitary”: All the latest updates about the upcoming sci-fi thriller film

“Dune”: Warner Bros has dropped the trailer of this sci-fi film