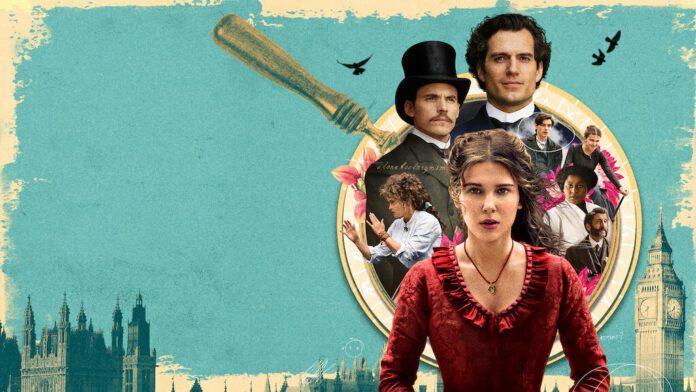 Enola Holmes 2 is now streaming on Netflix. Stranger Thing’s Milly Bobby Brown is now back as Sherlock and Mycroft’s younger sibling in Enola Holmes 2. It is directed by Harry Bradbeer, screenplay written by Jack Thorne and a story they co-wrote together. The film is being produced by Mary Parent, Alex Garcia, Ali Mendes, Millie Bobby Brown, and Robert Brown.

Enola Holmes 2 is a detective story that revolves around Detective Enola Holmes, she is now investigating the mysterious disappearance of a girl. Although this case seems tougher and it is expected that she will definately need her brother’s help to solve the mystery.

In this movie after finding her calling in the first film, Enola is once again on the case and this time, she appears as a real detective. Her detective agency is not going well as because everybody wants their cases to be solved by the famed Sherlock Holmes. When she gets the opportunity to look into the disappearance of a young girl, Enola teams up with some familiar faces to solve the mystery and prove herself to be a true detective.

The movie Enola Holmes 2 stars Millie Bobby Brown in the lead role. While Henry Cavill, Helena Bonham Carter, and Louis Partridge all reprise their roles as Sherlock Holmes, Eudoria Holmes, and Tewkesbury. But it has come to know that Sam Claflin will not be returning as Mycroft Holmes. Although the new cast members nclude Hannah Dodd (Bridgerton), David Thewlis (Harry Potter), and Sharon Duncan-Brewster (Dune).

Based on the synopsis and trailer, it is expected that the movie is going to be an entertaining and thrilling film that does complete justice to its predecessor.

Read- Kantara is all set to release on Amazon Prime Video