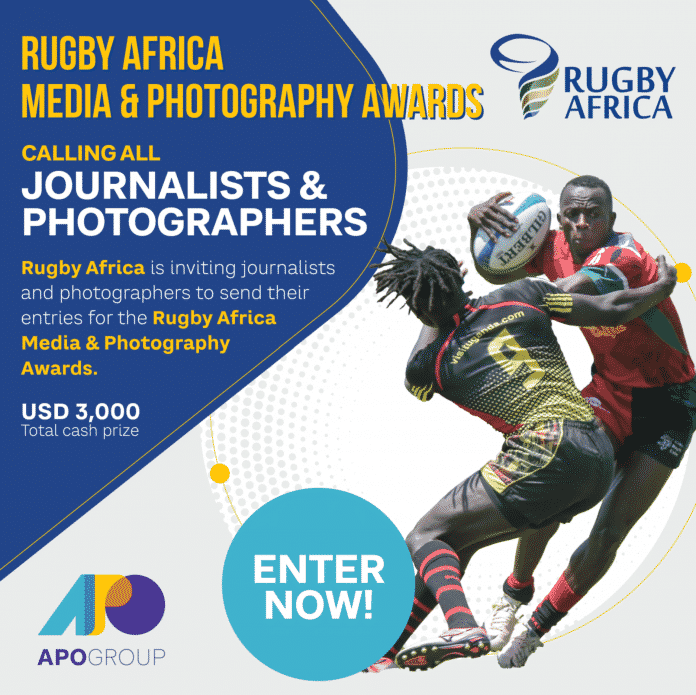 CAPE TOWN, South Africa, May 17, 2021/ — Rugby Africa presents the Inaugural Media & Photography Awards this season. According to Coralie van Den Berg, General Manager at Rugby Africa, two creatives, will have the opportunity to walk away with a whooping US$1500. For the love of the game, we are inviting submissions from Cape Town to Cairo and all the beautiful cities in between.

As part of Rugby Africa’s work to grow the culture of our sport across the continent, the criteria for media and photography will be cognizant of submissions that value the promotion and progression of the game as we love it, throughout the continent. Over the years, many moments have shaped the face of Rugby on the continent, and we would like to hear from the women and men, who have been there to capture them.

As a show of support to journalists and photographers who have the invaluable task of documenting the game for fans and players alike, the inaugural Media & Photography Awards, represents a new era of sharing and appreciation of our sport, which has brought so many together. The applications will be open as of 17 May and will close on 17 July. This will see the winner announced on 18 August.

We are putting a very deliberate focus on the heroines and heroes, outside the field of play, working tirelessly to promote Rugby in every corner of the continent, a sport that continues to change and bridge lives.

But we know that great content can come from anywhere, so even you can submit your “drop-kick at posts” in this exciting new competition. Fans and players together are the pulse of every game, both young and old, so the competition is open for all to participate and take part in the action – we would be honoured to consider your submission. If your friends and family like it, there is a great chance that our judges will like it too.

Over the years Rugby has increasingly made its mark as entertaining pastime for many, but more than that, it has elevated the promise of brand Africa through exploits of countries such as South Africa, Kenya, Namibia, and others. As the bastillion of Rugby on the continent, Rugby Africa is impressed by the far-reaching achievements of all stakeholders in the game, which has ensured broad based recognition of the sport, as it should be.

According to Khaled Babbou, President of Rugby Africa, Rugby Africa is a continental pillar of the sport, as a regional association of World Rugby. For many years, it has worked at different levels with member nations, involved in the official practise of 15s and 7s Rugby in different parts of Africa. Both women’s and men’s rugby is promoted by Rugby Africa. The Men’s and Women’s Rugby Africa Cup and Sevens tournaments as well as the U20 Barthés Trophy are some of the key drivers of the work we do on the continent. From our 39 member nations, 24 are full or associate members of World Rugby, which bears testament to our representation and commitment to being a progressive leader in the game.

Further to this, our dedicated scrum of team members continues to grow and nurture relationships with local rugby unions, through collaboration, offering workshops, programs, tournaments, and other platforms of engagement around the game.

As a continental sensation, Rugby has endured the test of time as a sport, from humble beginnings, it has grown into a multinational phenomenon, best witnessed in popular culture, through the all decisive Rugby Africa Cup. On the world stage, we are proud to have taken the cup home as a continent, most specifically through South Africa (the current world champions), bearing witness to the strong support the sport has received across the board.

For more information on how to enter, prizes you can expect and who the judging panel will consist of, visit the below links for the two separate awards: