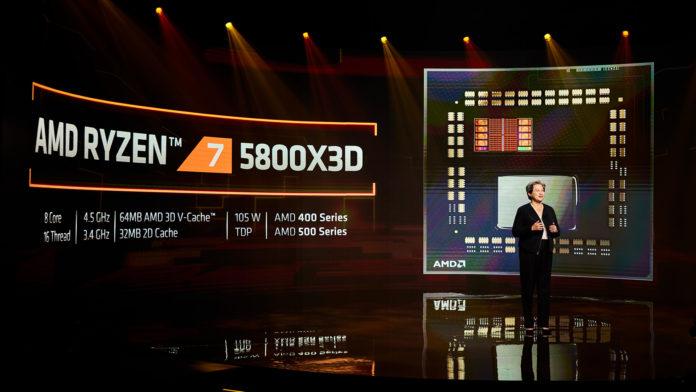 While AMD has a justification for launching the Ryzen 7 5800X3D as the only 3D V-Cache option for mainstream 8 core gamers, it appears that the true reason for making the brand new technology limited to only one processor has something to do with TSMC’s 3D tech supply and production capabilities.

You’re probably wondering why it’s so difficult to make a Ryzen 7 5800X, a 7nm CPU with 3D V-Cache. Manufacturing a 7nm device isn’t difficult anymore, thanks to TSMC’s years of experience and its 7nm node’s extremely high yields. The addition of 3D V-Cache, which uses TSMC’s brand new 3D SoIC technology, is the key concern here.

The TSMC 3D SoIC technology, according to DigiTimes (via PCGamer), is still in its early stages and has not yet reached volume manufacturing. Furthermore, the AMD Ryzen 7 5800X3D isn’t the only processor with 3D V-Cache. You may recall AMD’s EPYC Milan-X processor range, which was unveiled a few months ago. Yes, 3D V-Cache is used, as well as multiple stacks rather than a single stack.

A Milan-X chip, such as the flagship EPYC 7773X, has eight 64 MB stacks for a total of 512 MB L3 cache, whereas a single AMD Ryzen 7 5800X3D uses just one 64 MB SRAM stack. And, given the significant performance benefits of additional cache in enterprise workloads, these chips are in high demand in the market.

As a result, AMD chose to favor its Milan-X processors over Ryzen 3D chips, and the Vermeer-X chip was the only one in the entire stack. Last year, AMD showed us a prototype Ryzen 9 5900X3D, but that’s no longer an option. The AMD prototype included 3D Stacking on a single stack, which begs the question of whether AMD could have made the Ryzen 9 5900X and 5950X function with only a single 3D stacked CCD, and what the potential latencies and performance would have been like. AMD did reveal similar performance benefits for a 12-core prototype running on a single stacked die, but the volume must be extremely constrained if even those chips didn’t make it to final production.

However, there is reason to be optimistic, as TSMC is now constructing a brand new advanced packaging facility in Chunan, Taiwan. The new plant is planned to be operational by the end of the year, allowing for greater supply and volume production of TSMC’s 3D SoIC technology, as well as future Zen 4 versions using the same packaging technique.

AMD promises a 15% performance boost in gaming over their current portfolio, and the new CPU’s compatibility with the existing AM4 platform means that consumers with earlier chips may update without having to replace their entire platform. The AMD Ryzen 7 5800X3D is set to hit the market in the spring of this year.