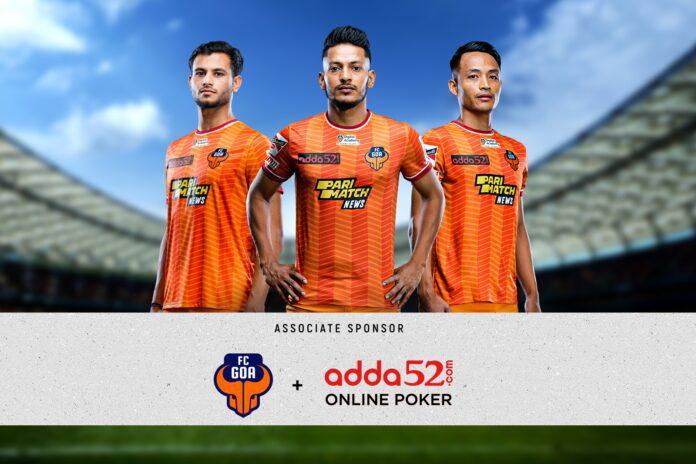 Adda52.com aims to promote skill-based sports and football just fits in right there. Structurally, both Poker and Football are very similar. The knowledge and understanding of the game, the skills to enhance the performance, the mental fortitude to not succumb to pressure, and the ability to read the opponent’s mind to stay a step ahead – it’s the same in both sports.

Speaking of the brand’s association with FC Goa,Mr. Krishnendu Guha, Chief Revenue Officer, Adda52.com said, “We are thrilled to support FC Goa and are committed to taking the sports ecosystem ahead in all possible ways. We believe that games are a way of life, not merely a kind of amusement. Adda52.com is dedicated to promoting the development of al­­­l types of skill games, so we would like to offer our support and best wishes to FC Goa as they compete for the coveted ISL Championship this season.”

“Adda52.com is honored to join hands with FC Goa as a sponsor and help the team on its path to become a source of talent for the national team. The new season has begun, and we can’t wait to watch FC Goa win the championship!” adds Mr. Krishnendu Guha.

Ravi Puskur, FC Goa – Vice President stated the association with Adda52.com, “On behalf of FC Goa, I’m thrilled to welcome Adda52.com on board as our sponsor. This is our third season together. The association exemplifies the trust that our partner brands have on us to deliver.

“With fans coming back to the stands this season, we believe the upcoming Hero ISL season is set to be momentous. And with Adda52.com coming on board as our sponsor this season, I believe there will be even more opportunities for us to work together on a number of common goals for the two brands.”

Adda52.com has been continuously associating itself with different sports in order to strengthen the sports ecosystem in the country. The brand recently sponsored the US Open broadcast on Sony LIV as well along with sponsoring a number of regional and state-level sports events.

The Bleachers are Going Silent: Exploring the Decline of ISL and I-League Match Attendance