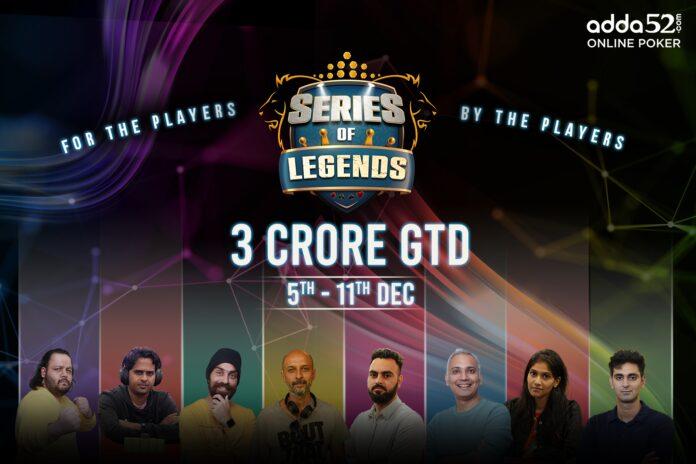 Adda52 -India’s online poker destination, announced the second edition of its ‘Series of Legends’ event inviting the legendary Indian Poker players across the country to unite and compete with the finest poker heads in the country. This year, the ‘Series of Legends’ will be held from 5th to 11th December, where poker fanatics from across the country will get a chance to play with their favorite renowned Poker legends and bust them out to win from the amazing bounty prizes.

The series is going to feature 8 Poker champions who will have their specific tournaments and the players are supposed to challenge them in order to win huge bounties. The series will witness the likes of legendary Indian Poker players like Arun Sriram – Adda52 Pro, Loveleen Singh, Kunal Patni, Shuchi Chamaria, Gagandeep Malik, Arjanveer Singh, Shravan Chhabria, and Siddhanth Kripalani. ‘Series of Legends’ invites players from across the country to participate and play Poker with the recognised Poker players and win hefty bounties.

Speaking at the launch, Mr. Krishnendu Guha, Chief Revenue Officer, Adda52.com said, “Through the second edition of ‘Series of Legends’, we are continuing with our legacy of coming up with exciting user-centric Poker events. Series of Legends aims to unite and bring the legendary Poker players in our country to come out to play, and take the game to new heights. Moreover, this series will provide an opportuinity to Poker enthusiasts from across the country to participate and earn a chance to play with the best Poker brains in the country. Adda52 is focused on making online Poker gaming so exciting for the users that it creates a disruption in the online gaming industry.”

The ‘Series of Legends’ tournaments also includes exciting contests with huge bounty prizes for the participants who will beat legendary Poker players like – Knock out Loveleen Singh in the 55 Lac GTD Highroller Singh and win a bounty worth 10K. Bust Kunal Patni on Day 2 in the 1 Crore GTD Patni Millionaire and pick up a bounty amount of 5K. Similarly, you can knock out any specified legend and win a 5K bounty in the other SOL events as well. The biggest tournament in the series is going to be the Patni Millionaire.

The first edition of Series of Legends was held in December 2021 and offered a mammoth prize pool worth 2.6 CR GTD. and drew in more than 5k entries, along with witnessing the presence of the legendary Indian Poker players like Minissha Lamba. A total of nine winners were crowned at the series and Harsh Bubna headlined the series by championing the 1 Crore GTD Patni Millionaire for INR 16.12 Lac.

With its second edition, Adda52 is determined to make ‘Series of Legends’ — bigger and better for the participants. Interested participants can get more information on the Adda52 website.

Read: Are Morocco the true dark horses at the 2022 World Cup?