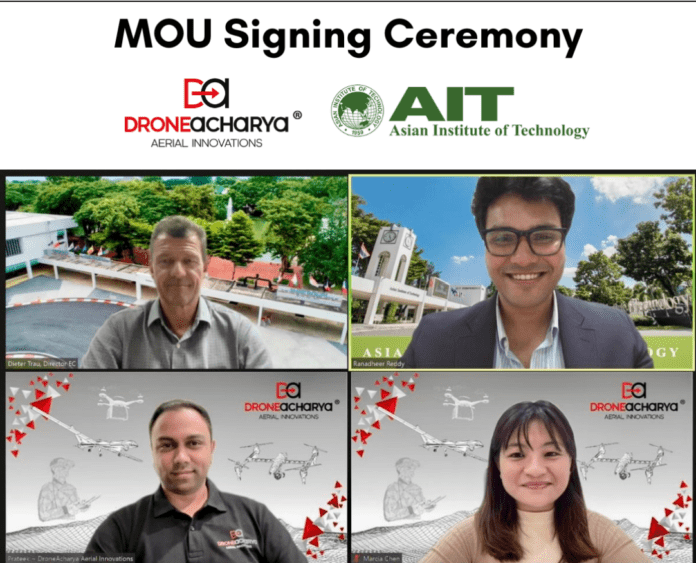 DroneAcharya Aerial Innovations Limited, an Indian drone service provider and DGCA – certified drone pilot training organization, today announced that it is commencing operations in Thailand, in association with the Asian Institute of Technology (AIT). The partnership will pave the way for the company into the Southeast Asian market. The primary goal of the collaboration with AIT is to co-develop projects involving Drones and GIS in Thailand and the surrounding countries.

While DroneAcharya’s initial focus is on the Indian market, the company will also be expanding into other countries, including the Middle East, the United States, Central Asia as well as Southeast Asia. As part of its strategy to expand across Europe and capture the market there, DroneAcharya is introducing a series of training courses centred on drones. Moreover, DroneAcharya is India’s First Drone Startup to be listed on the BSE SME platform.

Drones are becoming increasingly integral to the optimization of operations across a wide range of businesses. Together with AI, the data they collect and analyze from a bird’s-eye view are transforming the ways in which businesses examine, survey, and map the ground, buildings, and crops below. The worldwide Drone market was worth $11.45 billion in 2016, and it is projected to reach $51.85 billion by 2025. It’s clear from these figures that the Southeast area, along with other countries in the world, has enormous growth potential. In nations like Thailand, there is a huge potential for expansion in terms of GIS, Development, AI / ML, Drones etc. The projects carried out in partnership will generate employment for Drone pilots, GIS experts, Engineers, and GIS Developers.

“Drones and geographic information systems (GIS) are two examples of cutting-edge technologies finding widespread use across a number of sectors. By providing limitless new opportunities from previously unfeasible viewpoints, they are revolutionizing the old methods. DroneAcharya and AIT are teaming together to break into the Thai and Southeast Asian markets with drone and GIS-related co-development projects. We are planning to launch shortly and have some initiatives in the works.” says Prateek Srivastava, Managing Director at DroneAcharya Aerial Innovations Limited.

DroneAcharya Aerial Innovations: The Pune Drone-Makers will be open for IPO on December 13th