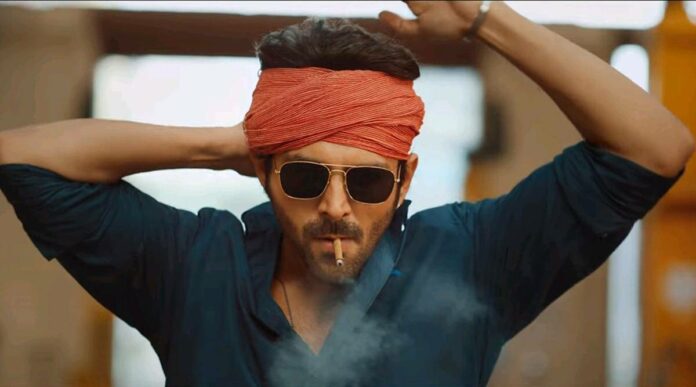 Kartik Aaryan returns with the cool action mode that has titled, ‘Shehzada’. Kartik Aarya n has treated the fans with the teaser on his birthday on Tuesday. This film is mainly the remake of Allu Arjun’s Telugu drama Ala Vaikunthapurramuloo, which was released in the theaters in 2020.

The teaser starts with a grand entry of Kartik’s Bunty on a horse. He enters the palace announcing, “Jab baat family pe aaye, toh discussion nahi karte, action karte hain (When it comes to your family, you do not indulge in a discussion, you do action).” Next, we see the actor packing some punches and in the action sequences, we clearly can spot the influence of south films. However, Kartik has beaten up some thugs, riding a scooter into the battlefield, and completes it with the top swagger.

In the female lead, we have seen Kriti Sanon in such a glamorous avatar, dancing like a peacock, and winking for the Shehzada. For instance, people are flying in the air just with one punch and Kartik is doing some action on his scooter, which looks quite old. There were immediate comparisons with Allu Arjun, who has found immense popularity with the film across India. “Certain scenes reminded me of Allu,” wrote one, while another said, “Can this film weave the Allu magic?”

In the trailer, Kartik has said that Shehzada is his ‘Sabse commercial film’, after watching the teaser we have no doubts about that. Towards the end, there is a glimpse of a glamorous Kriti Sanon, doing nothing. Also, there is a shot of Kartik imitating Shah Rukh Khan’s patent open-arms action. From the look of it, it seems the film is made on a hefty budget.

The film has been helmed by Rohit Dhawan. Apart from Shehzada, Kartik Aaryan is also looking forward to the release of Captain India and Freddy.

Read More: The Way of Water: All the Latest Updates We Need to Know about the Sequel