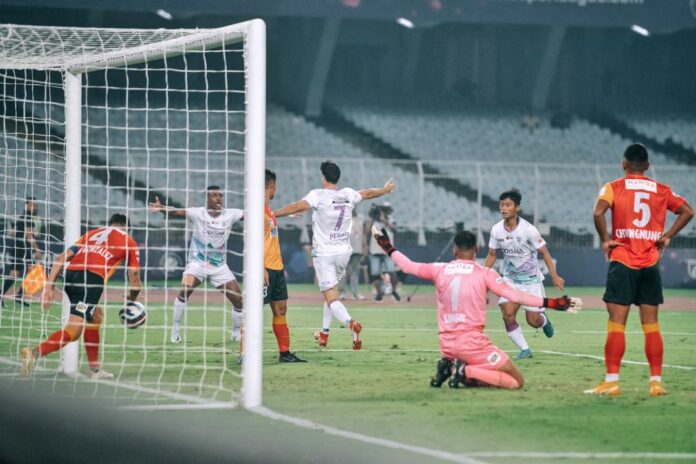 Odisha FC recorded their third comeback win of the season as they beat East Bengal FC 4-2 in the Indian Super League (ISL) at their home ground in Vivekananda Yuba Bharati Krirangan in Kolkata. Josep Gombau’s men pulled off an outstanding comeback from trailing by two goals at half-time to securing all three points. Pedro Martin scored two as Jerry and Nandhakumar scored one each to overturn strikes from Semboi Haokip and Naorem Singh.

Semboi Haokip was gifted with the opportunity by VP Suhair after Jordan O’Doherty found the winger on the right with a perfectly synchronized chip over the top in 23rd minute. The Odisha defence was caught sleeping as Suhair’s straight pass to Haokip saw an on rushing Amrinder look on helplessly.

EB’s quick reaction to grab chances fetched another goal 12 minutes later.VP Suhair, now on the left, caught on a loose ball, ran into the area and crossed it to Mahesh Singh on his right to tap home the second goal.

After the first half , Odisha manager Josep Gombau made some changes to accelerate their attack. Pedro Martin was came and he had an immediate impact, scoring two goals to get Odisha level the score. Another substitute, Jerry completed the comeback for Odissa FC in the 65th minute.

Odissa then made a two-goal cushion after Saul Crespo’s long diagonal found Sekar on the left flank. The winger beat substitute Sarthak Golui before scoring in Odisha’s fourth and final goal of the match from a tight angle in the 76th minute.

Odissa enhanced its reputation of scoring the most number of goals against East Bengal in the ISL and increased its tally to 12 points even as the season’s first home win eluded the red and gold brigade. The three points lifted Odisha FC to third place in the tableof ISL, three off Mumbai City FC with a game in hand.

Odisha FC will host Chennaiyin FC next on November 24. East Bengal remain in eighth place and will move to Jamshedpur for their next away match on November 27.