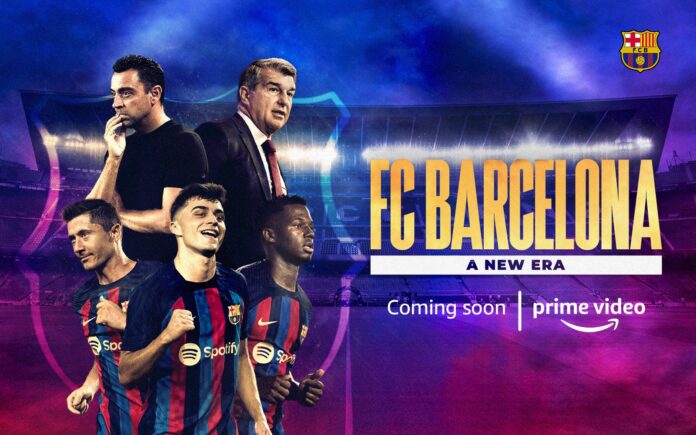 FC Barcelona documentary is all set to release on Amazon Prime Video. Nowadays, football documentaries have become mainstream content in the world of media and entertainment. Amazon Prime’s All or Nothing series is attracting everyone at a large scale across the football world globally.

Amazon Prime video, therefore, is all set to launch another such venture. The OTT platform is now all set to release a documentary on FC Barcelona the next month i.e. on December 2022. The title of the series named as “FC Barcelona: A New Era”. The title has been confirmed by the club’s official Twitter handle.

The Amazon Prime Video streaming service has secured all the exclusive distribution rights to this new documentary series which is mainly focused on Spanish LaLiga club FC Barcelona. “FC Barcelona, a new era” will be produced by Barça Studios, the club’s in-house production division.

The documentary series named FC Barcelona: A New Era, is mainly focused on the inside story of the football club FC Barcelona. The documentary will consist of 5 episodes and will have a 30-minutes running time and is going to premiere in December on Amazon Prime Video.

It seems that it will cover Barca’s 8-2 defeat at the hands of Bayern Munich to the current season, with special coverage of various notable events such as the exit of Luis Suarez and Lionel Messi.

It will also cover exclusively the last season of Messi’s burofax as well. Additionally, it will also be expected to show us the return of Joan Laporta as president and his influence in helping Barcelona shape the future of the team.

It seems that Xavi will play a key role in this series. The coach of the current Barcelona side, the Spaniard may even dominate this project, having been highly influential behind the club’s revamp in the summer, along with the contract extension of Ousmane Dembele.

Read- List of 5 Indian cricketers, whom no one knows acted in Movies