ISL 2022-23: McHugh’s late goal has ATKMB and Mumbai share spoils after going a man down 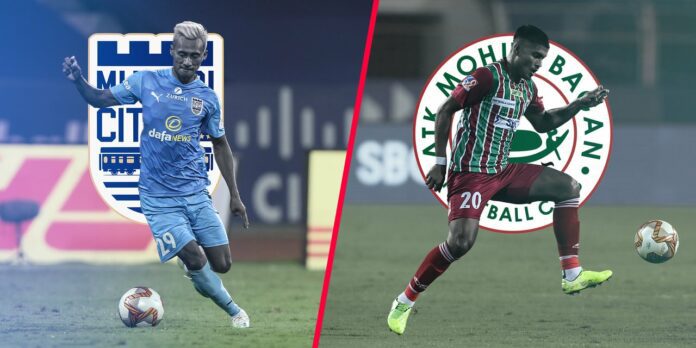 Mumbai City FC and ATK Mohun Bagan were involved in a high-octane 2-2 draw in the Hero Indian Super League (ISL) encounter at the Mumbai Football Arena on Sunday (Nov. 6). Lallianzuala Chhangte’s screamer in the fourth minute was nullified by Mehtab Singh’s own goal three minutes into the second half. Rostyn Griffiths put the host in front again in the 72nd minute before Carl McHugh scored four minutes after coming on in the 89th minute.

Both sides were unchanged from their respective last games as the Islanders started on the front foot as Chhangte put the host in front after just four minutes. The winger cut inside from the left flank and unleashed a ferocious strike at goal. The ball came off the underside of the crossbar and bounced inside the goal line.

Three minutes later, the crossbar rattled yet again, but this one came at the other end. Dimitri Petratos curled a beautiful cross in from the right flank, and Liston Colaco got his head on it. Unfortunately for ATK Mohun Bagan, the ball hit the woodwork and stayed out.

Moments before the halftime whistle, Bipin Singh pounced on a stray ball inside the box. The winger’s powerful strike was palmed away by Vishal Kaith at the near post as the scoreline, surprisingly, stayed 1-0 in favour of the hosts.

ATKMB levelled the score early in the second half. Rahul Bheke intercepted Boumous’ cross, but it fell to Manvir, who squared it to Joni Kauko. The Finnish midfielder’s strike picked up a deflection off Mehtab Singh before landing in the back of the net.

In the 72nd minute, the hosts retook the lead. Ahmed Jahouh crossed the ball in from the left flank before Griffiths’ header deflected off the crossbar and hung above the goal. Griffiths beat Kaith to it as it came down and nodded the hosts into the lead.

Things went from bad to worse for the visitors as half-time substitute Lenny Rodrigues was sent off for an off-the-ball offence on Greg Stewart in the 75th minute. The crossbar was struck for the fourth time when Stewart’s freekick came off the bar in the 83rd minute.

ATKMB restored parity in the 89th minute. Petratos’ cross from a freekick was headed into the net by substitute McHugh just four minutes after coming on. The Irishman’s first goal in three years snatched a crucial point for ATK Mohun Bagan.

ATKMB, placed fourth on the points table, now has seven points from four matches, while MCFC, placed third, has nine points in five matches. The Kolkata giants’ next game will be against NorthEast United at home on November 10, Thursday.

How can Federico Gallego impact ATK Mohun Bagan for the rest of 22/23?