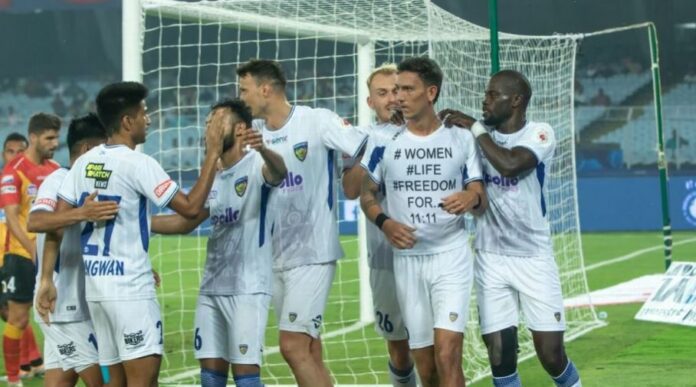 Vafa Hakhamaneshi scored the winner for Chennaiyin FC against East Bengal in the Indian Super League (ISL) on Friday. The 69th minute strike from the tall defender was his first of the season.

More than the manner of the goal, the celebrations caught the attention of many. The Iranian player ran towards the camera, lifted his jersey and revealed a “#Women #Life #Freedom for 11:11” message on his under-shirt. The message was in support for the women in his country.

Chennaiyin FC defeated East Bengal 1-0 in a heated contest in the Indian Super League (ISL) match on Friday, a match in which both sides saw red cards. For the Marina Machans, it was defender Vafa Hakhamaneshi who was sent off just after scoring the only goal in the match in the 69th minute.

The clock was just ticking towards the 70th minute in the game between East Bengal FC and Chennaiyin FC. The fixture which never produced a win was ambling towards another dull stalemate. Until Vafa Hakhamaneshi decided to take things into his own hands for the visitors.

The Iranian rose the highest to nod home from a corner from Aakash Sangwan. Thomas Brdaric’s men got their lead and looked set to take the three points home. But all that might not be talked about as much as the moment after the goal when Hakhamaneshi moved away from the goal to celebrate.

The centre-back had received his first yellow around the hour mark for a rash challenge. Vafa Hakhamaneshi got a second yellow card and received his marching orders from referee Umesh Bora. The decision to celebrate like that and the resulting yellow card has left people in different schools of thought.

On scoring and celebrating the way he did, he received a yellow card – as dictated by FIFA rules. It was his second of the game, which meant he was sent off. But that doesn’t matter to him, not nearly as much as the message he wanted to send.

Vafa’s message symbolised solidarity with the protesting women in his native country of Iran. Iranian citizens are currently protesting against the government following the detention and allegedly merciless killing of Mahsa Amini. The “morality police” of Iran allegedly detained Amini on the account of her clothing. The 22-year-old woman Amini was pronounced dead in custody on September 16th. The incident left a scar on the nation and has led to widespread protests from women in Iran.

This was chanted during Mahsa Amini’s funeral, the woman who was allegedly killed by the country’s religious morality police for not wearing the hijab, in accordance with the government’s guidelines. However, there was conjecture around whether the defender actually removed his shirt. Support poured in in support of the player and his decision to show solidarity for Iranian women.