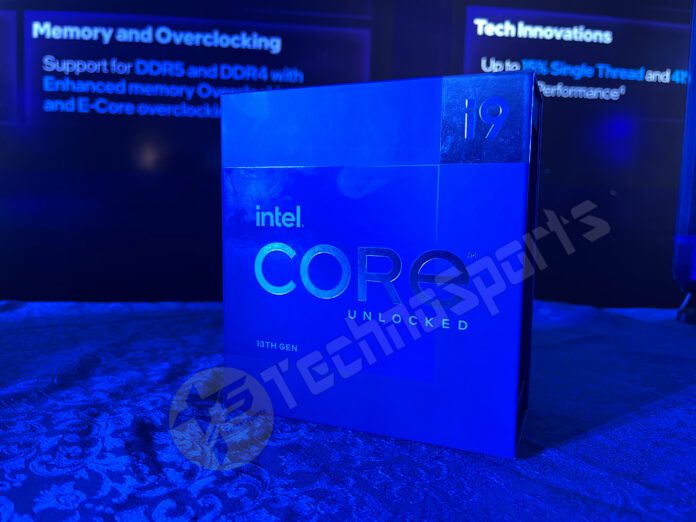 Intel has recently launched its new 13th Gen Core desktop processors in India and it held a launch event back on Tuesday where they presented a lot of info about these new CPUs to the media. Among them, the most fascinating thing which strikes me was the performance per Watt you can expect from the new Raptor Lake CPUs.

As we know, this time Intel is going all-in with Efficiency cores, providing up to 16 of them in the Core i9-13900K but how is this comparable to the older 12th Gen SKUs?

In CrossMark, Intel compared its new flagship Core i9-13900K with its predecessors and we saw an overall performance improvement of around 10%. This is significant for creators to achieve good achievement by Intel gen on gen mainly due to the major bump in core count.

The key thing which Intel showed us is that Intel’s new Core i9-13900K can give similar performance as the last gen Core i9-12900K, which drew a max TDP of 241W, for only 65W TDP and this is a massive efficiency improvement by Intel this time. At 115W TDP, Intel says you can expect 21% better multi-threaded performance and at 241W it will be around 37%.

Now, being based on a more mature Intel 7 process node, the 24-core Core i9-13900K will be unlocked for even more overclocking, so drawing around 253W, Intel expects up to 41% better multi-threaded performance. So, to get the most out of this Core i9-13900K a similar cooling solution to that of the 12th Gen could result in a massive performance hike over last-gen.

In terms of single-thread Intel boasts of double-digit gains and has already compared against the newer Ryzen 9 7950X. Intel says that on average you can expect around 15% better gaming performance even compared to the latest AMD flagship and that is a great deal I would say never did we expect Intel to be this aggressive.

AMD, on the other hand, during its event last week also said that the new Zen 4 architecture delivers similar performance to that of Zen 3 models at a lower 65W TDP. This goes to translate that the rivalry between both of them is at its peak and it will be interesting to see how AMD answers to 13th Gen in the coming months.