Prince: Everything We know about the Indo-British Love Drama film 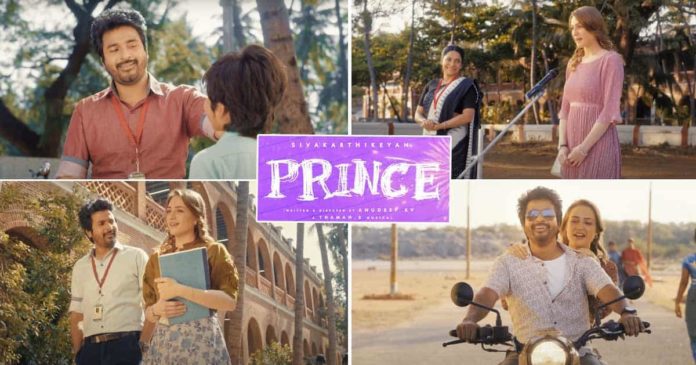 Sivakarthikeyan’s new film ‘Prince‘ is an upcoming promising love story. The film is waiting for Diwali in 2022. The film Prince has exposed such an intercultural love story where Sivakarthikeyan is playing the role of a school teacher who has fallen in love with a British national colleague. The path is not so easy as there are several challenges faced by this ‘forbidden’ love that looks to be formed the rest of the tale.

The new trailer starts with a disastrous situation while fire has spread everywhere. All the people are battling over caste and religion. One iron gate separated them, and they are like fighting with each other. In this crisis, we have seen Sivakarthikeyan who comes with a speech that the same blood is flowing in our veins.

With an axe he just cut the skin of a person and ask, ‘What is the color of your blood?’, the people replied ‘Red Sir’. He is playing the role of a school teacher. From the head principal, he got scolded as he gives permission to copy during exams. On this thing he provides a strange explanation, he said the permission is only for those who don’t know the answers.

In this school, we have seen a British lady who has joined as a school teacher. She is very happy about this. As the trailer continues, Sivakarthikeyan and the British teacher come close to each other by spending quality time. The two-love bird really enjoying the precious moments. Everything is fine until a national issue arises due to the caste problem. The problem become more erupted when an Indian boy fell in love with a British girl. The couple really loves each other and is not ready to leave each other. There are many funny moments included in the trailer in the police station.

The latest Tamil-Telugu bilingual film ‘Prince’ has been written and directed by Tollywood’s Anudeep. The new Tamil version also features Sathyaraj, and Premgi Amaren there are such female lead Maria Ryaboshapka among the others, and there are also Prabhakaran and Anand Narayanan in the dialogues.

The film Prince has been produced by Sree Venkateswara Cinemas, Suresh Productions, and Shanthi Talkies and it has Thaman for music, Manoj Paramananda for the cartography, and Praveen KL for edits. There are the OTT and satellite rights of Prince along with Disney Plus Hotstar and Vijay TV respectively.

The movie is all about the love story between an Indian school teacher and a British girl and has set in Pondicherry. The new trailer is also packed and misses the Telugu nativity.

Previous article
FIFA 23: How to do the 80+ TOTW Upgrade SBC and what do you get from it?
Next article
ISL: Why have East Bengal lost both their opening games at the last minutes?