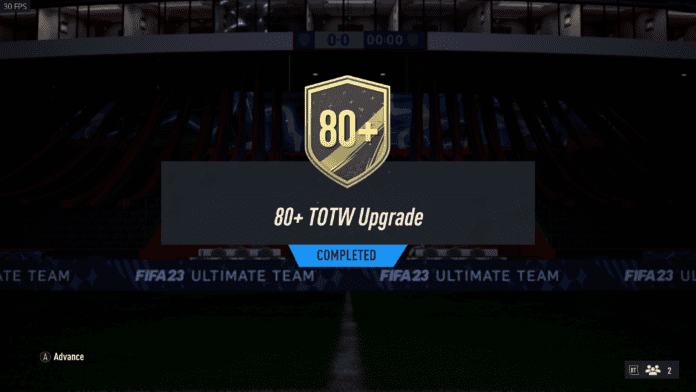 EA Sports’ football-based video game FIFA has been a huge hit with players over the years. They release a new version of the game around September each year. This year, FIFA 23 has been released worldwide on 30th September worldwide.

FIFA 23 has been good till now gameplay-wise. It rewards players with good playmaking skills and has a perfect balance between speed and skill. However, with upcoming title updates, the gameplay may change like previous versions.

EA Sports have released the 80+ TOTW Upgrade Upgrade SBC. It requires only 1 squad.

What do you get from the 80+ TOTW Upgrade SBC?

If you complete this SBC, you can get a Team Of The Week Player from Weeks 1-3. Let’s take a look at the players which you have the chance to get from this 80+ TOTW player pack.

You can get some of the best players of the game from this pack like De Bruyne, Son, Marquinhos, Haaland, Modric, Salah, etc. However, there are many lower-rated players as well.

I got 84-rated Hofmann from my 80+ TOTW Upgrase SBC pack. Unfortunately, my pack luck wasn’t good enough, but still, I got high-rated fodder, which is good.

Let us know in the comments below, what you got from the pack.

Previous article
Ammu: Aishwarya Lekshmi Coming for a Power-Pack Drama Film
Next article
Prince: Everything We know about the Indo-British Love Drama film