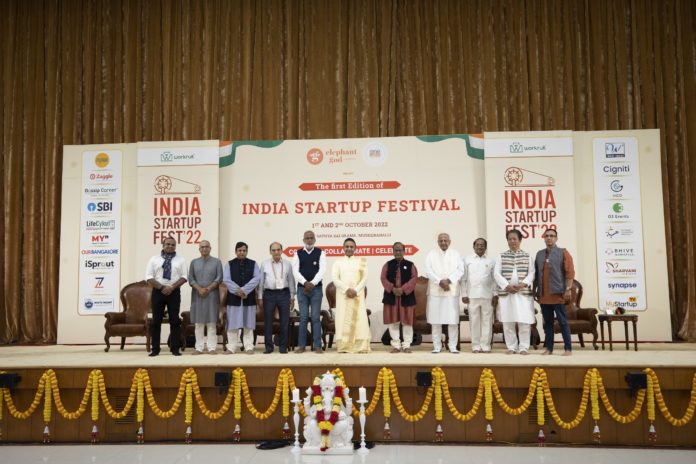 The largest Start-up Festival in the Country in Bangalore ended with a call for more Rural Innovation.

The First Edition of India StartUp Festival 2022 concluded at Sri Sathya Sai Grama, Muddenahalli, with massive participation and the presence of 1500+ StartUps across the country.

The presence of 75+ investors, founders, and CEOs from the country’s top companies added the much-needed promise of support to the ecosystem where young entrepreneurs and StartUps came with anticipation of collaboration and Mentorship.

The Festival created fantastic networking opportunities with investors, and mentors for all the StartUps. The two-day Festival was absolutely a knowledge-packed program with themed exhibitions, Round Table discussions in critical areas like Women Empowerment, Fintech, Education, Rural Health and nutrition and Bharat 2.0.

Some of the startups have been able to help in successfully conducting the event with their unique services and tech platforms. For example, the networking app is powered by ‘LifeCykul’, a startup which has a community and networking platform. Also, a Hyderabad-based startup ‘Workruit’, not only supported as a gold partner but also helped several other startups & companies by providing a platform to find talent through its portal at no cost.

During the Inauguration of the Festival presented by Elephant God Enterprises, One Nation and Co-Sponsored by Workruit, Mr JA Chowdary Founder, General Chair ISF, welcomed all the delegates with the thought of creating an ecosystem of togetherness and supporting one another towards growth and a vision of New Atmanirbhar India. Sadguru Shri Madhusudhan Sai, in his word of blessings, urged all minds to work towards a new vision in the backdrop of their benefits reaching the lowest of the pyramid in this nation.

Mr. Raja Mukherjee, Co-Founder of ISF mentioned that ISF is not just a 2 days festival, but a holistic program that has created a foundation for an integrated ecosystem for all the StartUps that was much needed in today’s day to flourish.

Mr. Ujjwal Mukhia, Co-Founder of ISF said that this festival has brought a revolution towards the focus of StartUps, investors and mentors towards organic growth and value creation.

Lifetime Achievement Award was awarded to BN Narasimha Murthy, chancellor of Sri Satya Sai University for Human Excellence, for his contribution to the education field. Among the luminaries, Dr. Velumani, Founder of Thyrocare, shared his knowledge addressing to all StartUps and delegates which was much needed. The festival was also virtually witnessed by more than 1.5 lakh delegates from across the globe.

1500+ StartUps under multiple heads participated in the StartUp pitch contest where the top 100 were selected and invited to be at the festival to pitch their vision, and 10 top made it to the recognised list who will be supported and mentored by the core group of ISF. At the Festival, 6 unicorns and soonicorns were also awarded for their exemplary employment generation and contribution to the country’s economic development.

The highlights of the festival were the symbolic unveiling of the CONNECT TO CAUSE program, the launch of One Rupee App and the launch of Gossip Corner – The Women entrepreneurship program.

The event was curated and executed by O3 Events, one of India’s leading event management entities.

Maharashtra overtakes Karnataka as the state with the most start-ups

20K startups will use T-Hub 2.0 as their primary resource